The Winklevoss Twins Bomb at Money20/20

The Winklevoss twins, known internationally as the half-CGI duo that Mark Zuckerberg may or may not have stolen that Facespace thing from (he didn’t; they’re idiots), have various Bitcoin investments:

 $11 million worth of Bitcoins, which at one point was 1% of all Bitcoins and was valued at up to $64 million before a “flash crash” dropped the price down to $120 per Bitcoin.

 “Winkdex“, a Bitcoin index that measures seven different markets in real time to relay the value of the ‘Coin.

 The “Winklevoss Bitcoin Trust“, a highly-anticipated, all-Bitcoin fund that the duo is trying to get on the NASDAQ stock exchange. If successful, it will be the first publicly-traded Bitcoin fund ever. (FYI, the paperwork says each share will be about $20.09, max, so get in while it’s hot!)

Just what the Bitcoin community has always clamored for: government intervention and regulation! You sure do know your audience!

They are also PERFECT for Bitcoin, saying it “potentially could be more impactful” than Facebook, a statement whose grandiosity cements their place in this delusional community. To put that into perspective, Blockchain announced that after five years Bitcoin has passed 2 million wallets (not users, mind you), while Facebook has famously accrued over a billion users in a little over twice that time. Welcome, fellas!

"We have elected to put our money and faith in a mathematical framework that is free of politics and human error." Tyler Winklevoss #bitcoin

Recently, at the currently ongoing Money20/20 conference in Las Vegas, the duo hit the stage and delivered what is being described as “a history of money”.

For you sheep who aren’t disrupting the global economy yet, let’s break down what Money20/20 is, besides being a catchy name that will be as irrelevant as the Microsoft Kin by 2020 itself:

Money20/20 brings together the worldwide community of innovators who are disrupting the way in which consumers and businesses manage, spend and borrow money, and explores the macro trends that form the underlying common thread of innovation, such as the mobile Internet, platform connectivity and interoperability, and consumer empowerment. (Money20/20)

Disrupting your ass! Great. So they are basically the annoying bits of Silicon Valley meshed with the douchebags on Wall Street, but with a stripper cage and garnish bar. Everything is in there: “Disrupting”, “Worldwide Community”, “Consumer Empowerment”, “Connectivity”, “Innovation”, “Interoperability” (?). It’s buzzword central! Perfect for the cult!

The conference has become pretty big in recent years, with a nice reputation to follow it. This year, it has attracted American Express, Amazon, Verifone, and more. Bitcoin and its followers are present, with reporting by Coindesk as well as a few others (more on that later). Vendors like BitPay are there, getting some nice press. Things, overall, have been going smoothly all around. Until the twins arrive.

Now what were these dorks doing at a “Disruptive Innovation Interoperability” conference? They were trying to talk about Bitcoin to an audience of, according to some sources, about 7,500 people.

The main takeaway from the talk is how disappointed the crowd was that the Winklevii didn’t announce their ETF (Exchange-Transfer Fund, presumably the “Winklevoss Bitcoin Trust”).  Before the ETF was even announced, the guys were failed entrepreneurs no one gave a shit about. But now, with Bitcoin, they were stars! And they were going to make their case for why this was a good idea.  This was something a lot of people were looking forward to, which meant a massive opportunity to get serious cash from serious investors. The first Bitcoin fund on NASDAQ? That’s an exciting prospect. I’m squirming in my seat just thinking about it!

This was posted just a few days ago in anticipation of the announcement:

The Bitcoin Investment Trust… Will it gain approval to trade publicly in the next 30 +- days? ( or Winklevoss Bitcoin ETF)

And here’s what came right after they reminded everyone they were those guys who bought tickets to space with Internet bucks:

winklevoss had their presentation, completely sidestepped any mention of the etf. lol not a good sign

Ok, so no Bitcoin ETF announcement and the Winklevoss presentation itself at #money2020 was a failure. Anyone not bearish right now?

Instead of using the anticipation to market their fund like crazy, like smart people would, they instead aggravated potential investors by aggregating all the worst ideas about economics and libertarianism from Reddit, BitcoinTalk and the Silk Road forums, which is no small feat. When you have no friends, you have no-one to tell you if something is a bad idea. Here’s a basic list of who was in attendance:

That is Page 2 of the Money20/20 brochure. Ignoring the fact that all the bullet points are ripped straight from an Amway recruiting flyer, they still have a captive audience of people eager to hear what they have to say, and they could have made great connections, gotten new investors, or even helped spread the word about Bitcoin to new, powerful people.

Instead, the Winklevoss twins crapped out a middle school-level PowerPoint presentation about the history of cash, why cash sucks, and how Bitcoin is The Currency of the Future, and vomited this crap onto a crowed of legitimate businesspeople, economists, and other professionals, assuming they had never heard this stuff before. It’s best summed up by this:

The winklevoss brothers are teaching 7500 payments experts about money. #money2020

Just look at this garbage. LOOK AT IT! 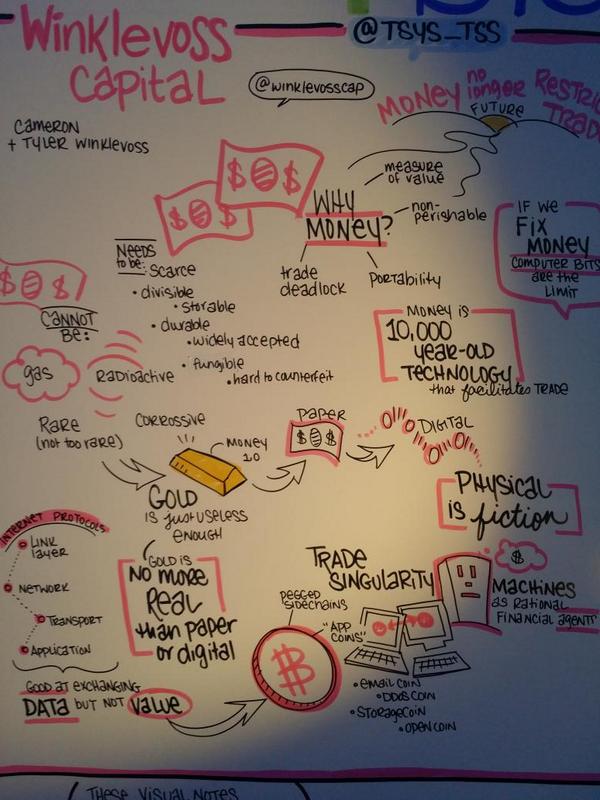 It’s also worth noting that one thing you won’t find on any of those slides is the word “Bitcoin”. It wasn’t mentioned at all during the presentation; they referred to digital currency in general and referenced “BTC” a few times.

It could have entertained the crowd for a bit, had it been presented well. But, unfortunately, the twins seem to have a history of not being strong public speakers. That’s fine, since Americans list their #1 fear as public speaking. But these aren’t average Americans. These are Super-Serious-All-Serious-Business Dudes, and they are trying to raise millions of dollars for one of the most volatile investments out there.

Take a look these goobers in their “Wonderful Pistachios” ad:

As a member of the 10% of Americans who like public speaking, I can say with utmost confidence that the Winklevii have no confidence  or even knowledge of what they’re doing. Notice how flat their tone is, how stiff their use of language is. For a national ad like that, this was the best take. That means that, somewhere, there are probably about 50 other takes that are just awful. Luckily, with TV ads, you can do takes and keep doing them until you get it right. Public speaking, however, is live, and rehearsals are mandatory if you want to sell your shit well.

While there is no video of the speech (and trust me, I am looking and will update this article when I find one), there is enough eyewitness testimony out there to make it clear this was a flop:

Feel pretty bad for the Winklevoss twins. Most of the room emptied by the end. #money2020

Wow. couldn't handle another minute of the Winklevoss presentation at the #Money2020 conference. #Fail

Here are some of the other things people noted about their talk:

 A Periodic Table of Currency, which was the most-criticized part of their PowerPoint:

 A chart detailing how “money” (again, Bitcoin wasn’t mentioned by name) has been vastly improved:

"As we've made $ digital, we've optimized many of its parameters." @tylerwinklevoss @winklevoss #Money2020 #bitcoin pic.twitter.com/YtmTmmktVs

 A confusingly remedial setup with no obvious payoff:

Eh, the winklevoss' are presenting at #money2020 and talking about the history of cash…I'm not sure how or where this is going….

 According to this guy, the Twins did the classic bad presenter move of reading everything from the slides:

Well, conference has been great, but Winkelvoss disaster was as bad as everyone else said. I can read my own slides, thanks. #money2020

 And, finally, the speech was so bad that trading has gone down because of it:

BTC trending down after winkelvoss disaster of a keynote. Slight pump possible but doom ahead #money2020

One last thing: according to eyewitnesses (including Miron Lulic’s tweet above), the minute people started fleeing their presentation, the twins were “visibly shocked“. They shouldn’t have been: if you don’t know your shit but pretend that you do, the people who do know it will dump you like you’re Spaincoin. And once they leave, they’re probably not coming back to learn more. If that doesn’t cement why Bitcoin is doomed to fail  not because of the technology, but because of the community  I don’t know what will.

UPDATE (11/13/14): The twins have officially released the PowerPoint slides to their presentation. With a quick glance, I can safely say I fully understand why people walked out at their tedious “Periodic Table” bit.