Don’t worry if those words don’t make any damn sense to you, because the entire thing is utterly nonsensical. Aside from the absolutely ridiculous name, the concept is outstandingly foolish: you, the hapless butt enthusiast, buy shares in the Winklevoss twins’ Bitcoin holdings and they take your money, then list dozens of ways your money can disappear, along with a hefty dose of caveat emptor, followed by cacophonous laughter.

Some choice readings from the writeup, thanks to SA‘s terrifying Bitcoin robot, …!, followed by translations for us regular folk:

As the Sponsor and its management have no history of operating an investment vehicle like the Trust, their experience may be inadequate or unsuitable to manage the Trust.

Translation: We, the absurdly named Winklevoss twins, have no idea what the fuck we are doing here.

The loss or destruction of a private key required to access a Bitcoin may be irreversible. The Trusts loss of access to its private keys or its experience of a data loss relating to the Trusts Bitcoins could adversely affect an investment in the Shares.

Translation: Oops we deleted our wallet.dat/reset the Amazon servers/forgot our password!

Political or economic crises may motivate large-scale sales of Bitcoins, which could result in a reduction in the Blended Bitcoin Price and adversely affect an investment in the Shares.

Translation: Some idiot will shout “Cyprus!” and the price will swing wildly.

It may be illegal now, or in the future, to acquire, own, hold, sell or use Bitcoins in one or more countries, and ownership of, holding or trading in Shares may also be considered illegal and subject to sanction.

Shareholders cannot be assured of the Sponsors continued services, the discontinuance of which may be detrimental to the Trust.

Translation: We very well may just take the money and run.

The reviews thus far are mixed. Wait, no they aren’t:

I've seen a lot of bad ETF ideas come to market. Some are still around, some aren't. I can assure you the bitcoin idea is dreadful.

Not got a ticker yet Winklvii? SCKR is free. FYI

Winklevoss twins are making a play to make bitcoins mainstream. How am I supposed to fund Central American revolutionaries now?

After much consideration, my comment on the winklevoss twins starting a bitcoin ETF is "lolololololololol"

Where do you trade Bitcoin ETF shares for WoW gold?

The Winklevosses should have realized their Bitcoin exchange wasn't such a hot idea when Mark Zuckerburg didn't try to steal it from them.

The Winklevoss twins are creating a Bitcoin ETF: http://t.co/VvE1TH4efr Ummmmmmmmmm

Having never seen Social Network, not getting all these Winklevoss puns but seem to be the only guys who can make Bitcoin even more annoying 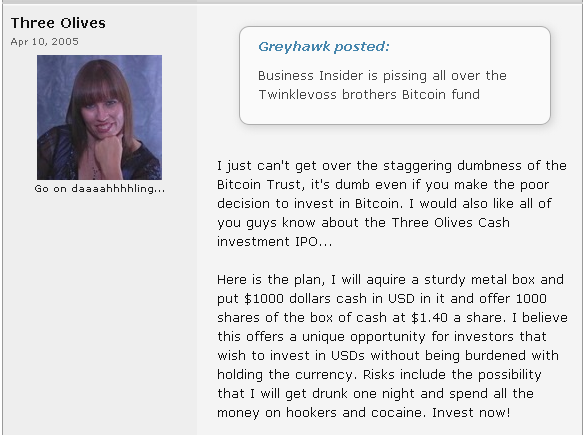 It is, of course, reddit, so this guy is totally wrong.

Even some of the True Believers at Bitcointalk are not so thrilled:

Not pictured: the worthless bits stuck to the toilet paper

Even actual money news people are critical and skeptical.

Do not give your money to anybody named “Winklevoss,” especially if they’re offering you Bitcoins in return.