The Story Of When Buttcoin.org Sold Out And How Butterfly Labs Turned It (And Other Sites) Into A Product Marketing Machine

(Note: This is a repost of an earlier poston the Buttcoin subreddit. I’ve added new information since the original post implicatingBFL of other site purchases)

My name is Evan. I’m the founder of Buttcoin.org(now ButtcoinFoundation.org)and have been making fun of Bitcoiners since 2011. Buttcoin is one of the oldest Bitcoin sites on the internet and a few months agocelebrated it’s 1 millionth visitor.

Nearlya year agoI (accidently) became a paid shill for Butterly Labs. And I wasn’t the only one.

In December of 2013, Bitcoin losing comedy steam (which thankfully came back!) and after 2 1/2 years of running the site I was getting tired. I had started up school again and work was getting steady so I wasn’t updating as much. I was in the middle of a redesign to keep myself busy but I went weeks between updates. But I liked the site so I kept it around. A few months prior our top notch reporterkillhamster had helped me find new comedy gold to mine and was posting consistantlyon the twitter. He had become the de-facto chief operator of the site.

I was approached by someone named Jeff. He emailed me from a domain at a local bar in Chicago. He had asked about buying the site. This wasn’t the first offer I had gotten. I have been asked to comment on articles in PC World and speak at John Hopkins University about Bitcoins and the site was somewhat popular, but no one ever put in any serious offers. The site got steady traffic but everyone who knows about Bitcoins, knows about computers. And everyone who knows about computers runs AdBlock. So the site made no money but was a fun little hobby of mine.

Jeff presented himself as a regular reader of the site who owned Bitcoins and had presumably cashed out. He said he liked the writing style, liked the site, and wanted to know if I was interested in a sale. I asked what he was offering. He said he wanted to offer me $XX,XXX dollars (not as high as the $30,000 someone is quoting however). I thought his was a joke. The site had no revenue and was virtually impossible to monetize. The only people willing to advertise on bitcoins sites are BFL, Mt. Gox, BitPay, and they would never advertise on Buttcoin. I asked him a few more questions to gauge his sincerity; what he planned on doing with the site, how the transition would be handled, would he allow me to continue to write for the site. He explained that he wanted to keep the site like “The Onion of Bitcoin”, wanted me to keep writing for a minimum of 6 months. He also wanted everything to be in his daughters name because she was just graduating out of journalism school and he wanted her to learn online publishing. The guy was going to buy my site and then let me still have control. I have bought and sold a few domains and sites before and could tell he was serious, so I said fuck yeah and took his money.

We did the site transfer and closed escrow. The day after the transfer occurred my admin account was locked out even though I had an agreement to stay there for 6 months. Since I was already fighting with little site issues because of the transfer I didn’t think much of it, I emailed Jeff but got no response. Killhamster still had publishing rights. The next day we noticed that our most popular article on the entire site, the “The $22,484.00 Butterfly Labs Mini Rig bitcoin miner is a huge, broken, unstable piece of shit.”had been edited and now read The Butterfly Labs Mini Rig is a sexy Bitcoin mining machine.

At this point killhamster emailed Jeff and asked what was up. He stated that there were “going to be some changes to attract new advertisers”. He explained that he liked the humor but picking on specific brands was no good. He said that BFL pays $1000/month for every ad on BitcoinTalk and that there’s no reason we can’t get the same kind of deal. Since my account was now locked out and I was the original author, killhamster could not change the article. At this point I was pretty bummed that what was told to me was no true but whatever, not much I could do about that now. Killhamster was still running the twitter and planning to do some funny stuff with future articles. I wanted to see what was up with this guy though.

I checked and see what was edited. The only thing edited was That BFL article and 2 more, one about them faking CE certification and one where Wired tested it and was unimpressed. But there was some much worse stuff on there that wasn’t touched. If he was trying to clean up the site for advertisers, why just those BFL articles.

Then I remembered that my Google Search Rankings for certain Butterfly Labs related terms were high. Very High. 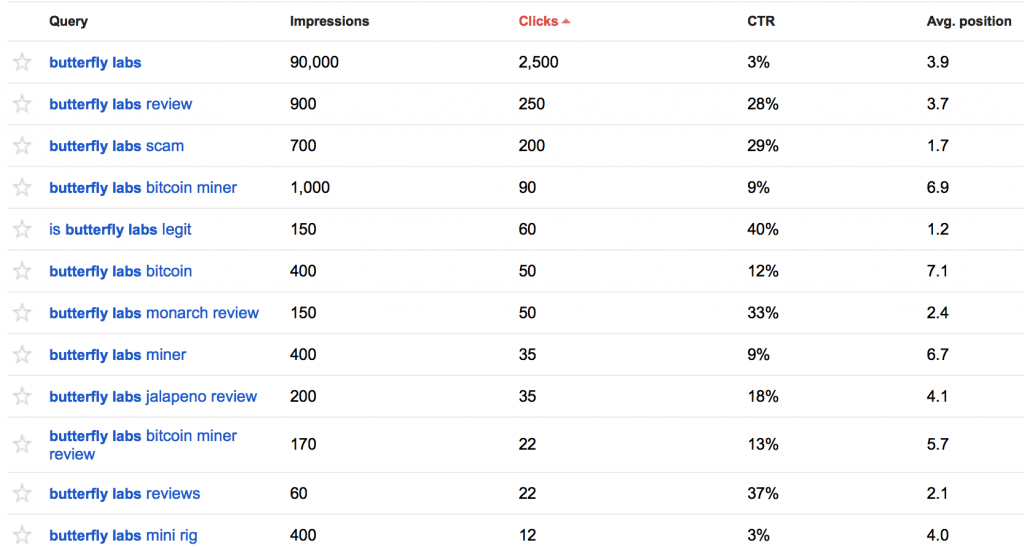 Buttcoin was ranking between 3-4 for the search term “Butterfly Labs” and “Butterfly Labs Review” and was usually #1 for “Butterfly Labs Scam” and “Is Butterfly Labs ligit”. It was obvious to me that the purpose of purchasing the site was to simply remove the negative articles that were destroying their search traffic and making them look bad.

So I Google “Jeff Butterfly Labs”

Jeff Ownby is the VP of marketing for BFL.

I never got his last name and all contracts where under his “daughter’s name”.

So I looked a bit deeper and see Jeff from BFL graduated from Elmhurst College in Illinois and the Jeff that bought Buttcoin emailed me from was a Chicago-area bar domain. I still couldn’t get this guy’s last name but I finally found an old Facebook post from a press release by the bar the guy owns and it said his name was Jeff Ownby. Could be another guy with the same name but I’m sure now that BFL bought the site simply to remove three negative articles.

After the FTC seized Butterfly Lab’s assets and Buttcoin.org went offline permanently, we decided to re-launch the site under our control again and re-post the original unedited articles in their entirety.

Since the original post blew up on Reddit, a couplepeople have come forward who used to work for BFL and Jeff. They said that this was the tip of the iceberg and that Butterfly Labs has gone in a major campaign to buy up Bitcoin websitesand turn brand-neutral sites into website who promote their products.

One of the most trusted Bitcoin sites on the internet is the site called WeUseCoins.com.WeUseCoins is one of the oldest Bitcoin websites (about a month before Buttcoin started, early 2011) and is known as the official “beginners guide” for new bitcoin users. It’s a brand-neutral site created by an early Bitcoin fan to clearly and plainly explain Bitcoin’s benefits. It’s on the Bitcoin wiki, the subreddit, and posted any time someone wants to know about Bitcoin. They also made the very popular “What is bitcoin?” videothat has over 600k views.

Ssometime in the past year Butterfly Labs purchased WeUseCoins.com as well.

The site now says “BF Labs” on the bottom and it’s obvious purchasing the site was mainly to inject product links to BFL products.

Take the link on this page to “mining contracts”.

Now look where it goes to: https://www.weusecoins.com/en/mining-guide

Butterfly Labs. Their links are peppered everywhere else on the site to. Any link that went to the Bitcoin wiki that mentions Mining Hardware or Mining Contracts now goes to the BFL website.

WeUseCoins is a PR6 website in Google which is very authoratative. Has over 450k backlinks as well.

A link from WeUseCoins is very valuable and just another one of many sites that BFL purchased to control their image online.

This is most likely against the FTC guidelinesto turn websites into paid advertising platforms since the intorduction of so called “Mommy Blogger Disclosure” laws which state that any links that can be considered paid advertising must be clearly marked separate from other content and any sponsors must be disclosed. Articles such as Buttcoin’s criticism of the BFL Mini-Rig being turned into a promotional article with zero article definitely run afoul of the FTC guidelines and should contribute to the legal clusterfuck that BFL is already in.

So that’s the whole story of how BFL bought Buttcoin.org, locked me out of the website, turned itand other websitesinto a a promotional machine until it was ultimately killed. It’s also the story of how we’ve risen from the ashes into our new, shill-free home at the Buttcoin Foundation. Until the next juicy offer comes around, I suppose.

‹ Operation Onymous Did Not Take Down 400+ Sites › Is It Stealing if the Vendor Doesn’t See You Take It? Part 2