That’s all there really is to send bitcoins. Actually receiving bitcoins is fucking terrible for a person who has no interest in bitcoins in the first place. I discovered this first hand when someone tipped me $1 and I tried to claim it.

I posted an article a little while ago titled “Cards against Humanity kindly tells Bitcoiners to please go fuck themselves” which was about the creator of the wildly popular Cards against Humanity game turning down the offer to accept bitcoins and the person who asked ends up being a little bitch about it. Go read the article, I’ll wait.

Eventually someone on Reddit with half a brain posted a thoughtful message to the Reddit community that trying to be snide dicks and forcing businesses to accept your busted funny money maybe isn’t the best way to grow your economy.

The link was posted without context so the OP posted a link to our Buttcoin article. Since I like to namesearch myself on social media in between chronic masturbatory sessions, I decided to jump in and defend myself against people who can’t seem to grasp things like “hobbies” and other non-profitable ventures. The following exchange took place: 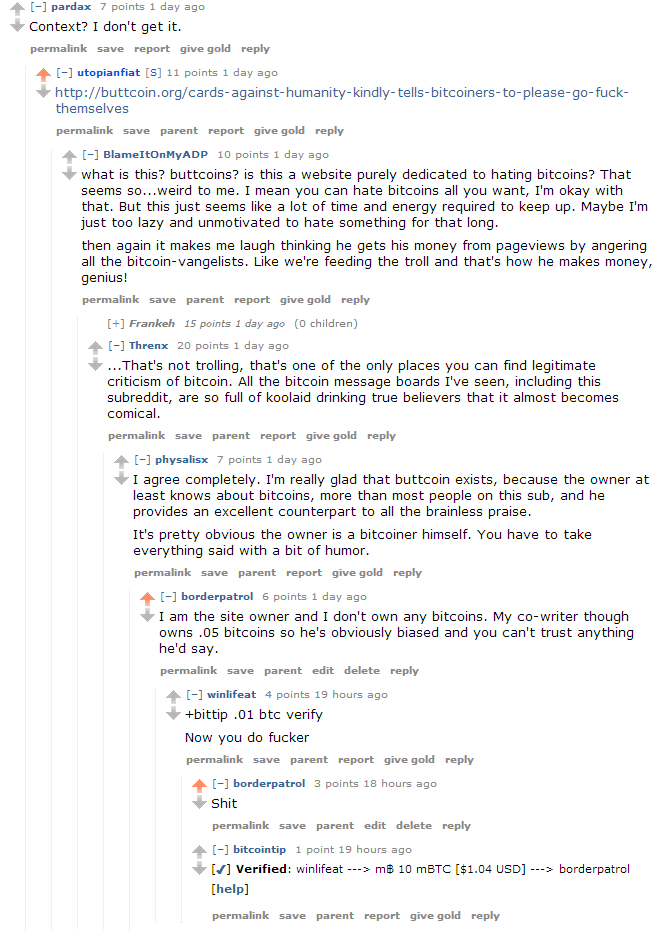 Someone, out of the kindness of their heart, took the time to send me a whole dollar just to .. spite me? Shame me? For whatever reason, Reddit loves to throw micro-bucks around Reddit, and they actually consider it to be one of the best validations that Bitcoin is a real currency.

We wrote up an article earlier on the site about how Reddit just loves to wander into different subreddits and “expose people to the value of Bitcoins”. They do this via the Bitcoin tip bot and you can always identify when it’s being used as a quasi-advertisement for Bitcoin via the phrase “Whoa, what just happened here?“. It’s like they’re reading from a script. Once you see it once you can’t stop seeing it and the constant shilling becomes unbearable. There will frequently be calls to go rush a post’s comment section to do nothing but tip and hype and shill for bitcoins. And the commenters are in it too because if you can get there first or pump Bitcoins hard enough you too could get a micro Bitcoin sent your way!

I’ve never known what it’s like to actually receive a tip however, and since I now have my shiny new nickel I thought I’d find out what kind of hoops I’d have to jump through to claim this money.

The first thing that happens if you get a message in your PM box on reddit. It tells you who sent you your funbux, how much, and if you want to accept or decline it. 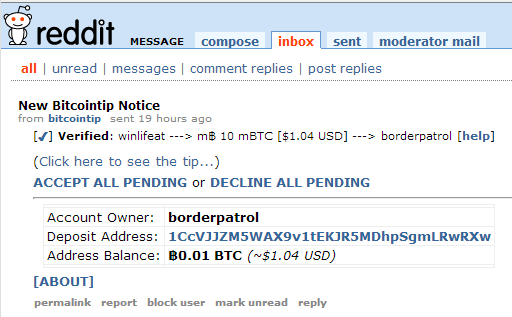 I really like getting money for free so of course I mashed that ACCEPT button with my grubby mitts! 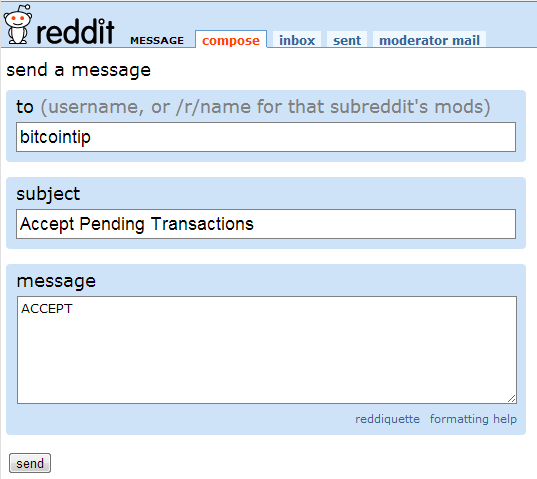 So then it gives me this. I guess the way it works if that you just message back the bot? I really have no idea but I’m a very busy man so I just blindly click the accept button…

And then nothing. After I hit accept that’s pretty much it. There’s no next steps, there’s no “go here to spend it”, there’s not even anything telling me what the fuck bitcoins are. To just hit ACCEPT and then your bitcoins get shuttled off into some randomly created bitcoin wallet which you don’t own yet. I wait about 20 minutes to see if there’s any more PMs coming but nothing. I go back to my PMs and click on the little [ABOUT] link in the first one to see if I can figure out what this is all about.

Clicking that link takes you to this page. 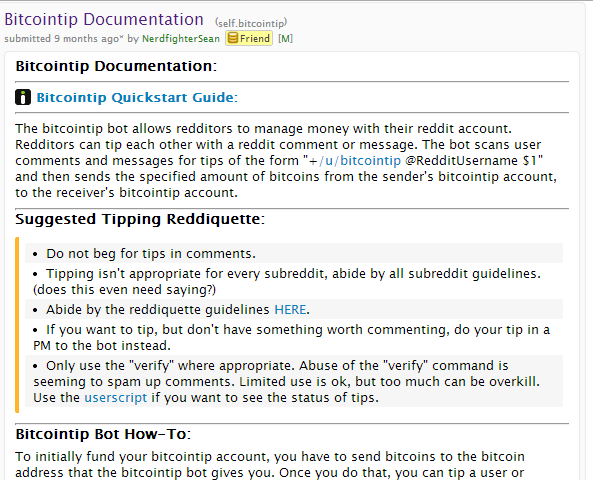 Do you see the problem here? This is the documentation for how to operate the bot. This page doesn’t direct you on how to get your money, what a wallet is or does or even what a bitcoin is. It does tell how to fund your tipping account, how to tip other users and other unrelated shit to someone who recieved got 18 cents in internet money.

If you scroll down enough you see there’s a series of commands that you can PM to the bot. It doesn’t specify if these are for send or receiving Bitcoins but what the hell let’s give it a shot. I got some Sour Patch Kids with my name on it at the local CVS and I need to get my $1.

I click the link that says WITHDRAW and it sends me to another PM prompt to withdraw my coins from the random wallet they’re trapped in. 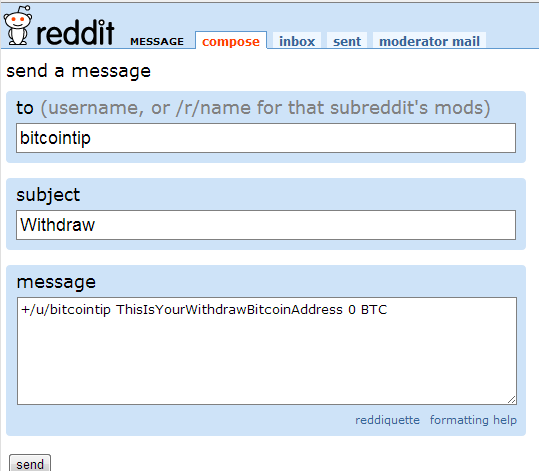 WTF is a BitcoinAddress? I go back to the documentation and there’s nothing there about what a bitcoin address is or what I’m supposed to do. I abandon this step for a second and want to make sure my bitcoins didn’t disappear into the ether or that is all just some sort of scam.

I hit the BALANCE link on the page and get another oh-so helpful PM prompt. 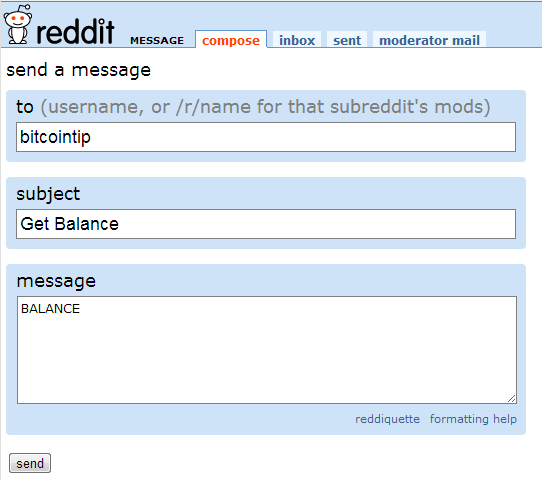 Alright, I send off for my balance and wait some more. Over an hour passes and I don’t see a response from the bot anywhere in my PMs.

Nothing at all, no response. Wouldn’t some website be easier? An account I could create? can’t I just get on this fucking website and get my money already, I got some motherfucking Shaq Soda to buy!

Finally I get a response.

By this time I’ve jacked off like 28 times and I’m ready for bed and don’t really have time for this shit so I decide to jettison my Bitcoins off into the ether instead. I decide I want to send my Bitcoins to the EFF but they wisely declined. 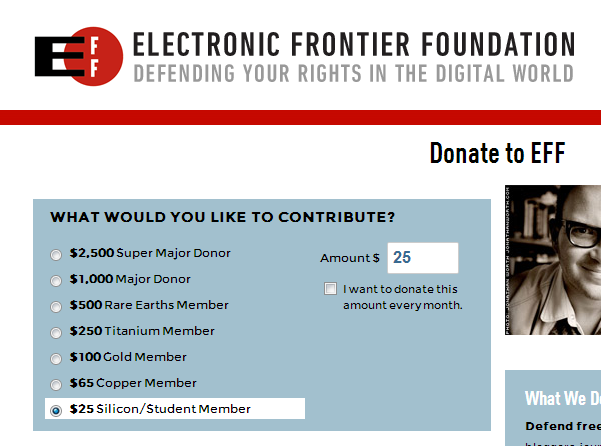 The whole r/bitcointip subreddit still doesn’t tell me shit so I just google “default bitcoin address” and get this lovely address in return.

That seems like a good address. I decide to send my bitcoins there to that nice guy or gal can do something great in the world with that money.

Back to the documentation I hit up the WITHDRAW link again. 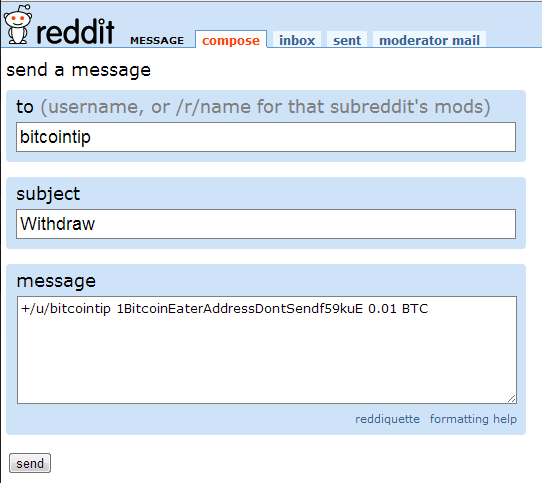 NO TRANSACTION FEES! So I didn’t really get a dollar because the EDIT:It’s actually because bitcoin does have transaction fees. WELP. 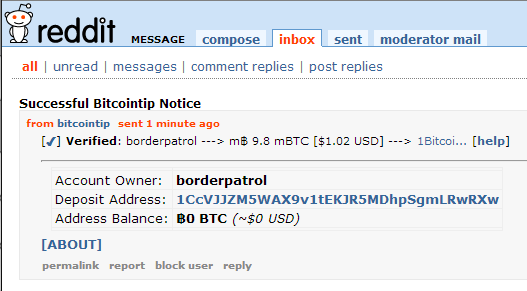 Currency of the future!

So why do these idiots still throw this crap around in the comments every chance they get. There’s 2 main reasons why it’s hyped on Reddit constantly.

The bitcoin tip bot is really nothing more than an easy way for smug pricks to throw worthless “money” around while they jerk off over each other trying to out-surprise one another for internet nickles.

‹ Introducing Brettcoin › Reddit thinks children should be introduced to gambling as a valuable Bitcoin teaching tool.