Wait I thought bitcoin was immune to this sorta stuff.

This kind of shit is the reason we need bitcoin, can't wait until we are not reliant on banks.. 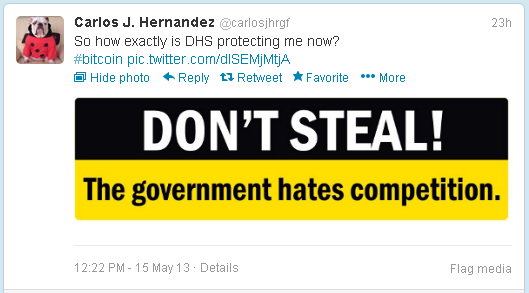 The government/PayPal/banks are afraid of Bitcoin!

The DHS has shut down MtGox #bitcoin exchange. This would only happen if they saw BTC as a viable competitor to the fiat greenback.

Article idea for Bitcoin journalists: Is PayPal going after Bitcoin and other cryptocurrency sellers?

Biggest deal about MtGox acct seizure is how matter-of-factly the govt. references #Bitcoin. It's real http://t.co/kN93vk2wTI

All this drama with #MtGox should be good for other #Bitcoin #exchanges such as #Coinbase that seem to be on the up and up. @coinbase

Yeah, I’m pretty sure this argument won’t work at all:

Mutum Sigillum (MTGox), when opening its US Wells Fargo account stated that, BITCOIN IS NOT MONEY and MTGox doesn't transmit money!!!!!!!!!!

There’s more to social media than Twitter, which is why we’ve found these for you:

Nobody’s career should depend on Bitcoins

For a fantastic laugh, look up “Freemen on the land” or “Sovereign Citizens“

‹ This is how royally screwed Mt. Gox is right now. › Why isn’t bitcoin totally worthless?