SomethingAwful forums poster “N00baTheHutt” had this to say: 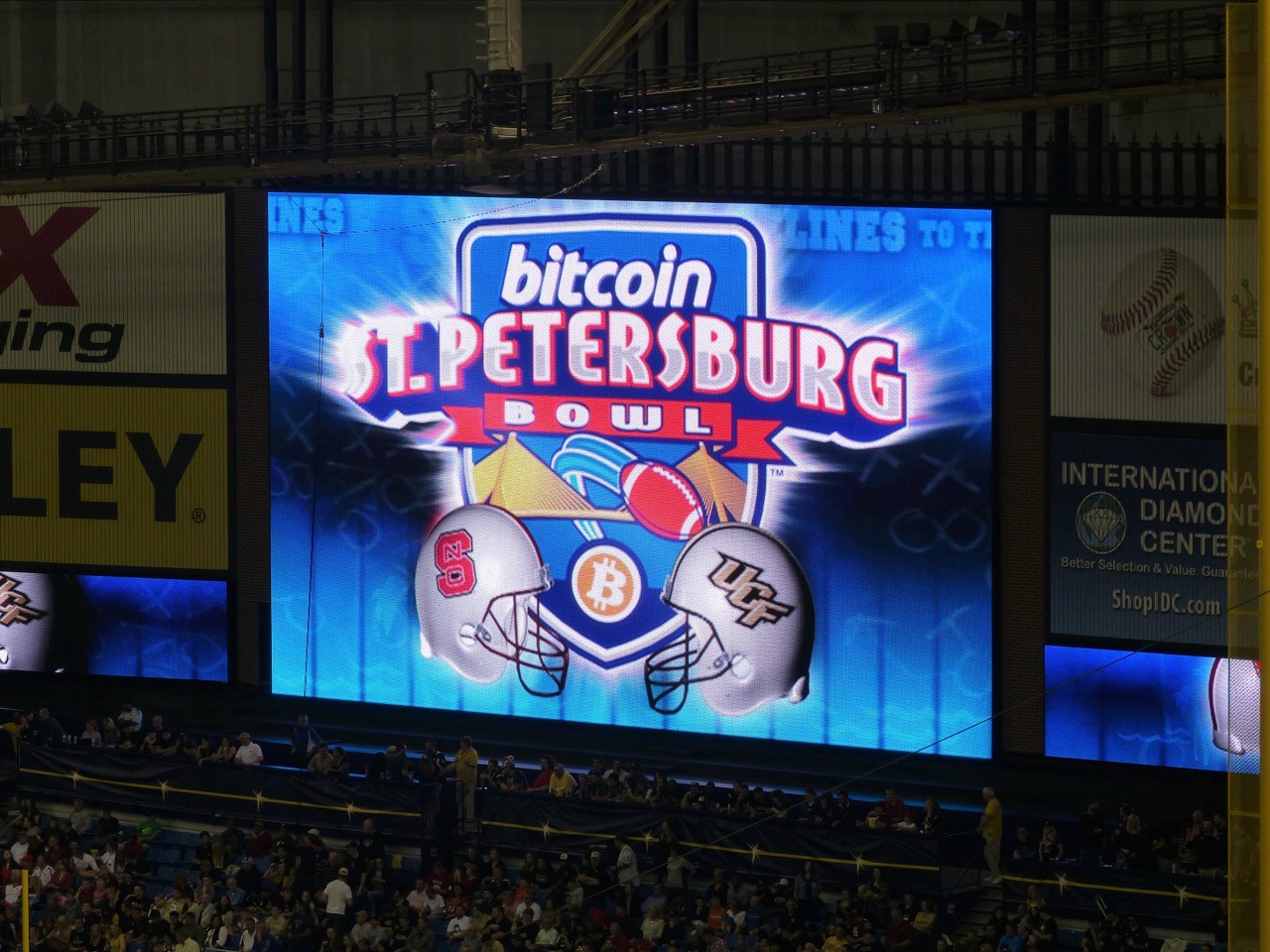 As previously mentioned, I didn’t see much in the way of obvious Bitcoiner activity at the game. It was basically a Central Florida home game, since they are from Orlando, only a few hours’ drive away, and that dominated the crowd. Coming through the turnstiles, people were greeted by a bunch of attractive girls in Bitpay shirts handing out glossy literature (more on that in a bit). I wandered over to one of them to ask if there was any centralized location where I could get a bunch more Bitcoin freebies (hoping for pitchforks, really), but she sheepishly confessed that she didn’t really know and wasn’t at all involved with Bitpay – they apparently just hired a bunch of women not even remotely affiliated with them to hand out their literature. Not really a surprise. Walking through the concourses, I did see a guy in a Pirate Bay shirt and a woman in a shirt saying “Bitcoins Not Bombs,” but that was about it for any bitcoiners. I did hear some people talking about it in the stands, though most of it was “Yeah, so you pay real money for internet money, but can you get it back out into real money?” and jokes about paying all featured charity donations in bitcoins.

Game balls were delivered by a group of Army Rangers rappelling down from the roof of the dome. This was done to the strains of Wagner’s “Ride of the Valkyries,” though I’m not sure if anyone besides me found that a bit, uh, ironic. 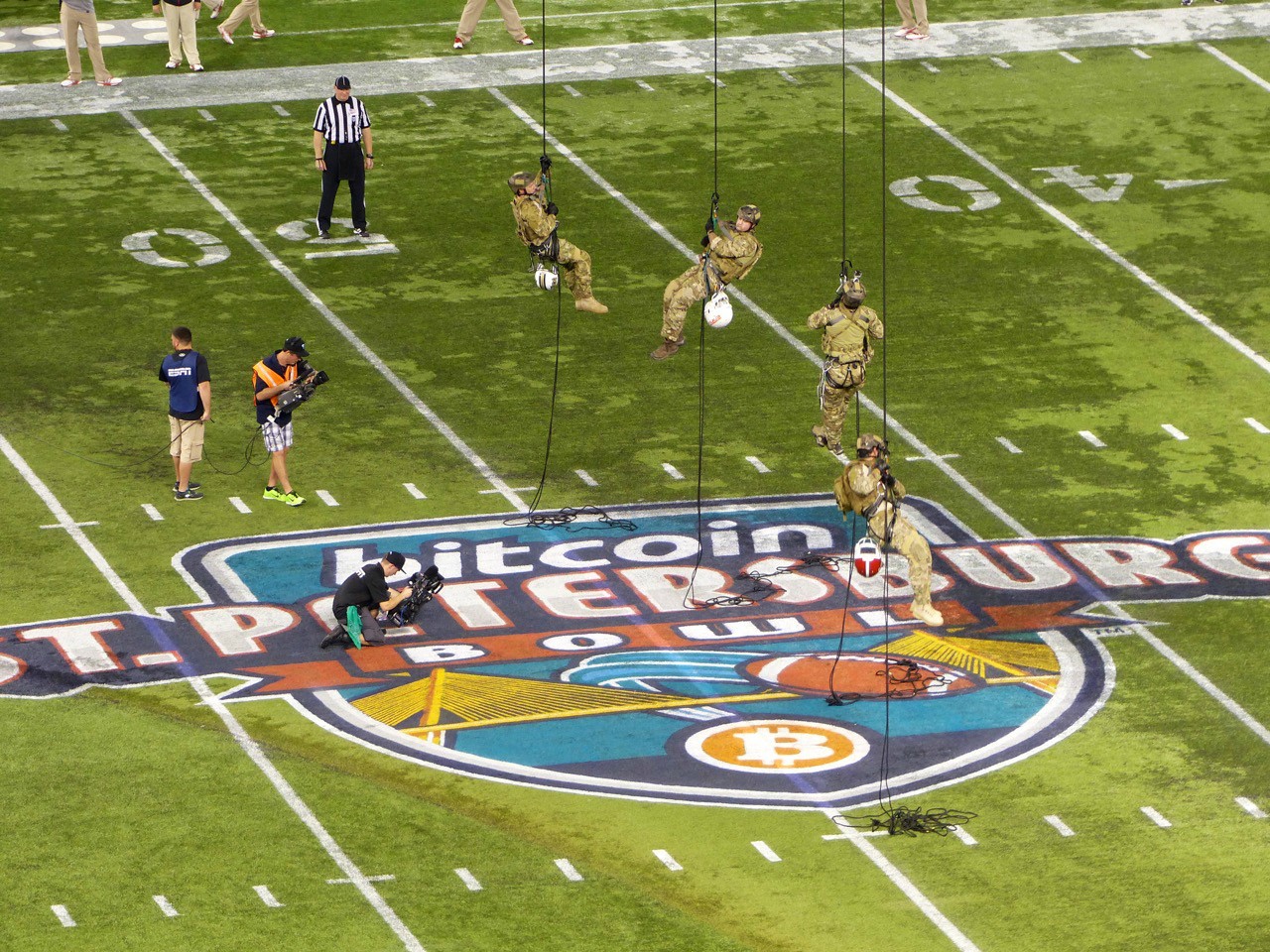 The Bitpay executives were there for the coin toss to determine first possession. One of them brought his dog. 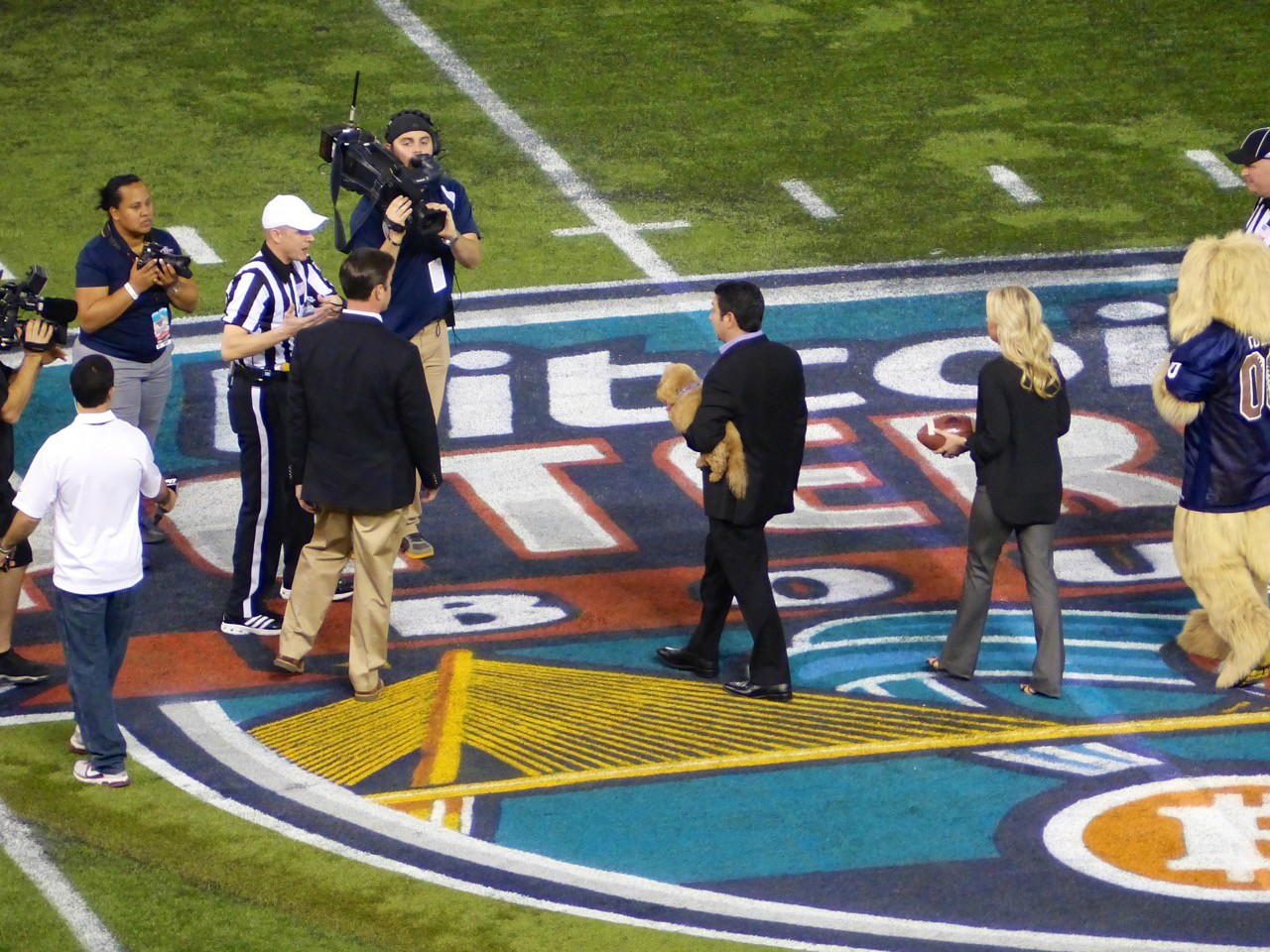 Probably a third of the seats at the Trop were blocked off, and even those that weren’t had plenty of free seats. 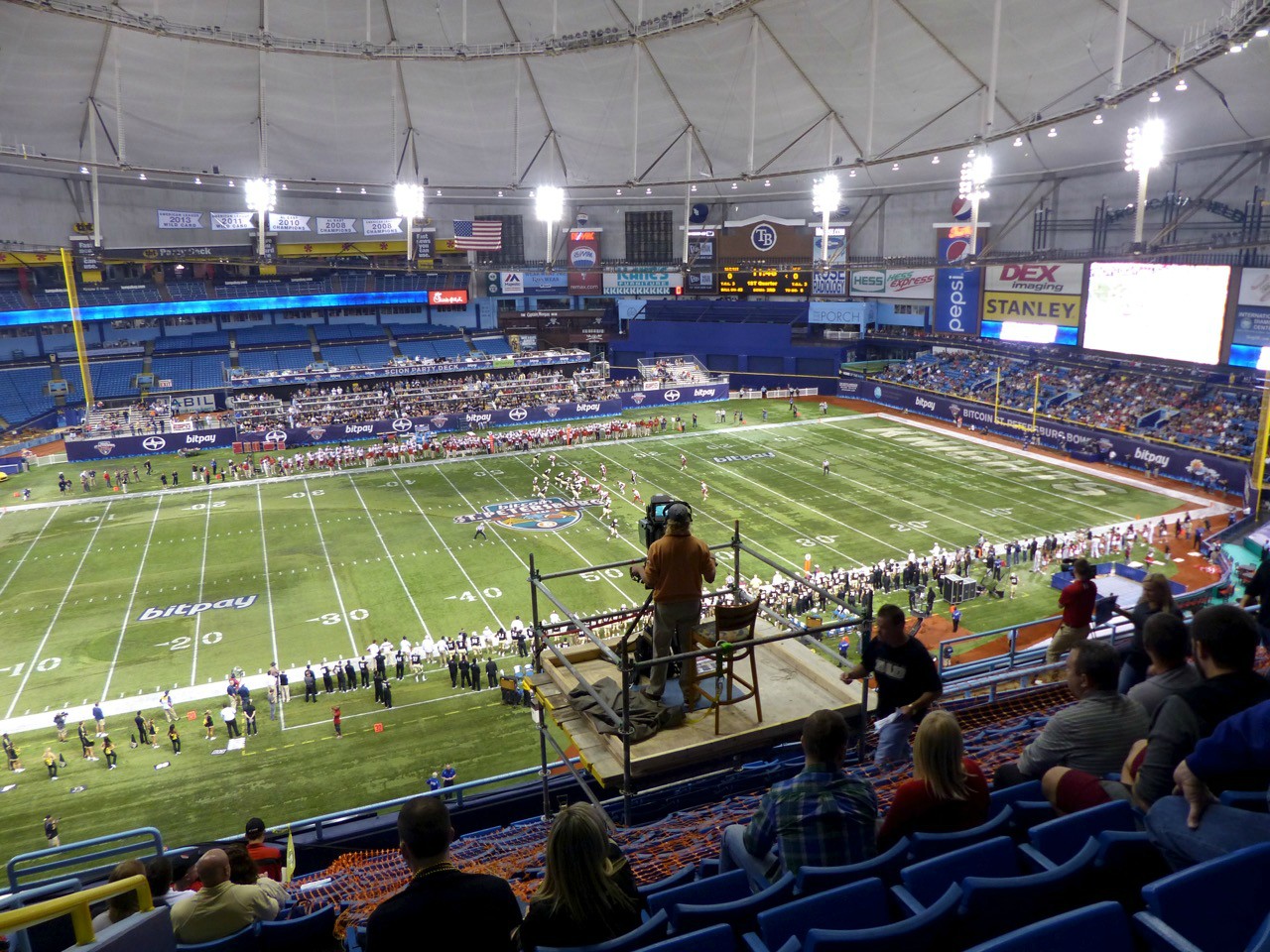 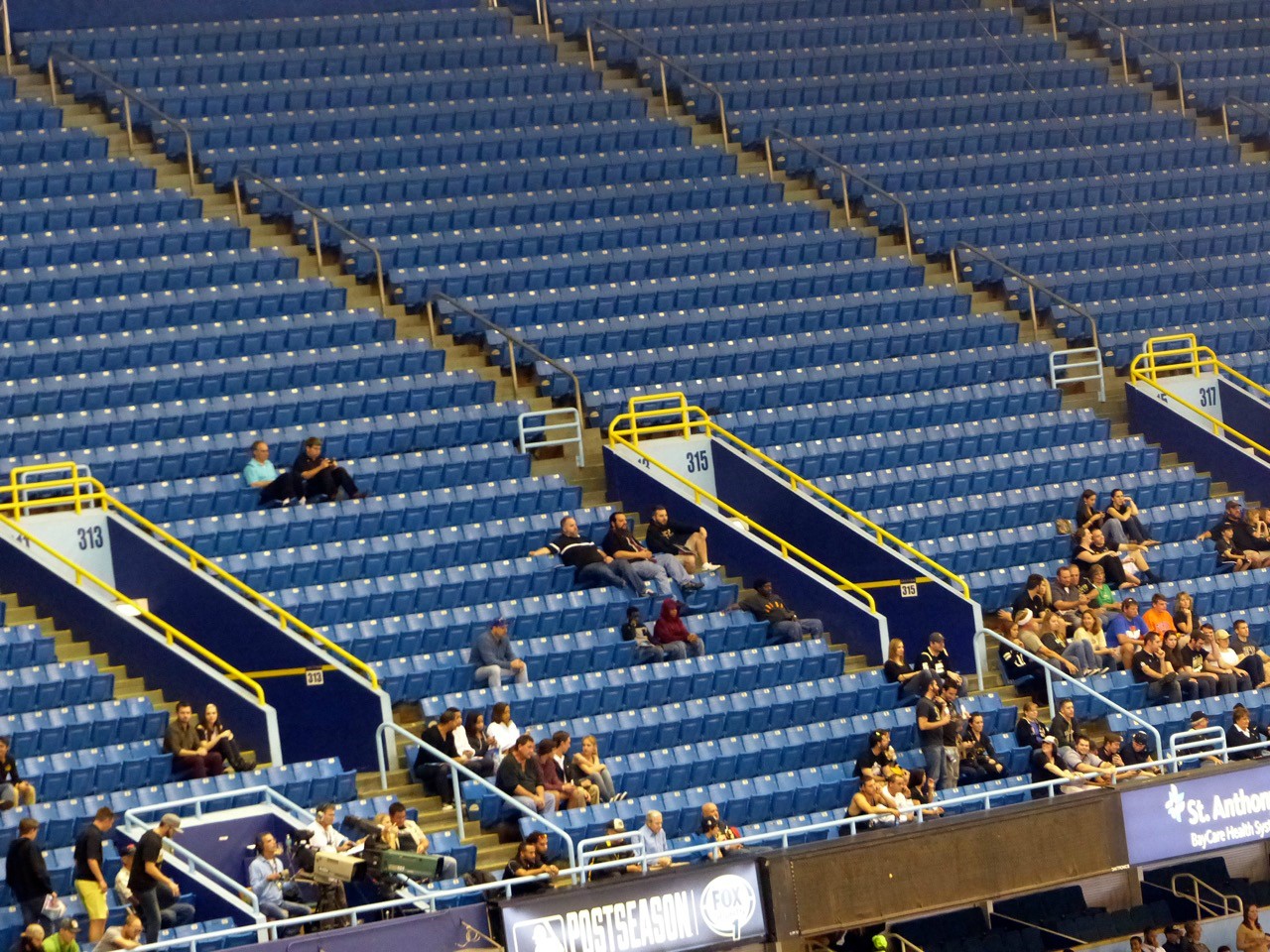 Didn’t quite get around to covering up all the MLB logos on the turf. 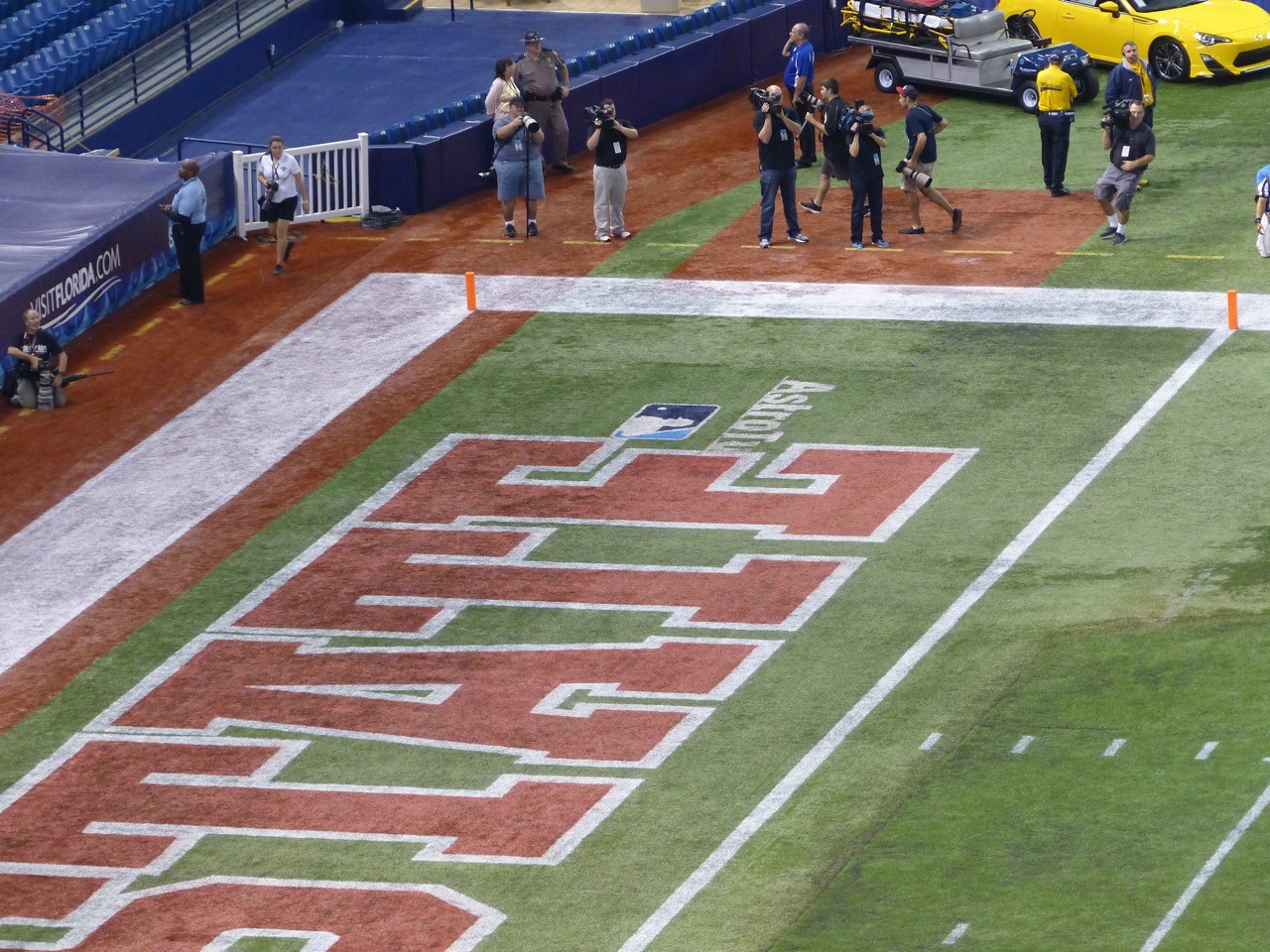 This thing didn’t show up in the plebian seats where I was – far as I can tell, it made a brief appearance in the sponsor/bigwig seats and nowhere else. Hopefully it has since been sucked back to the nether hells from whence it came. 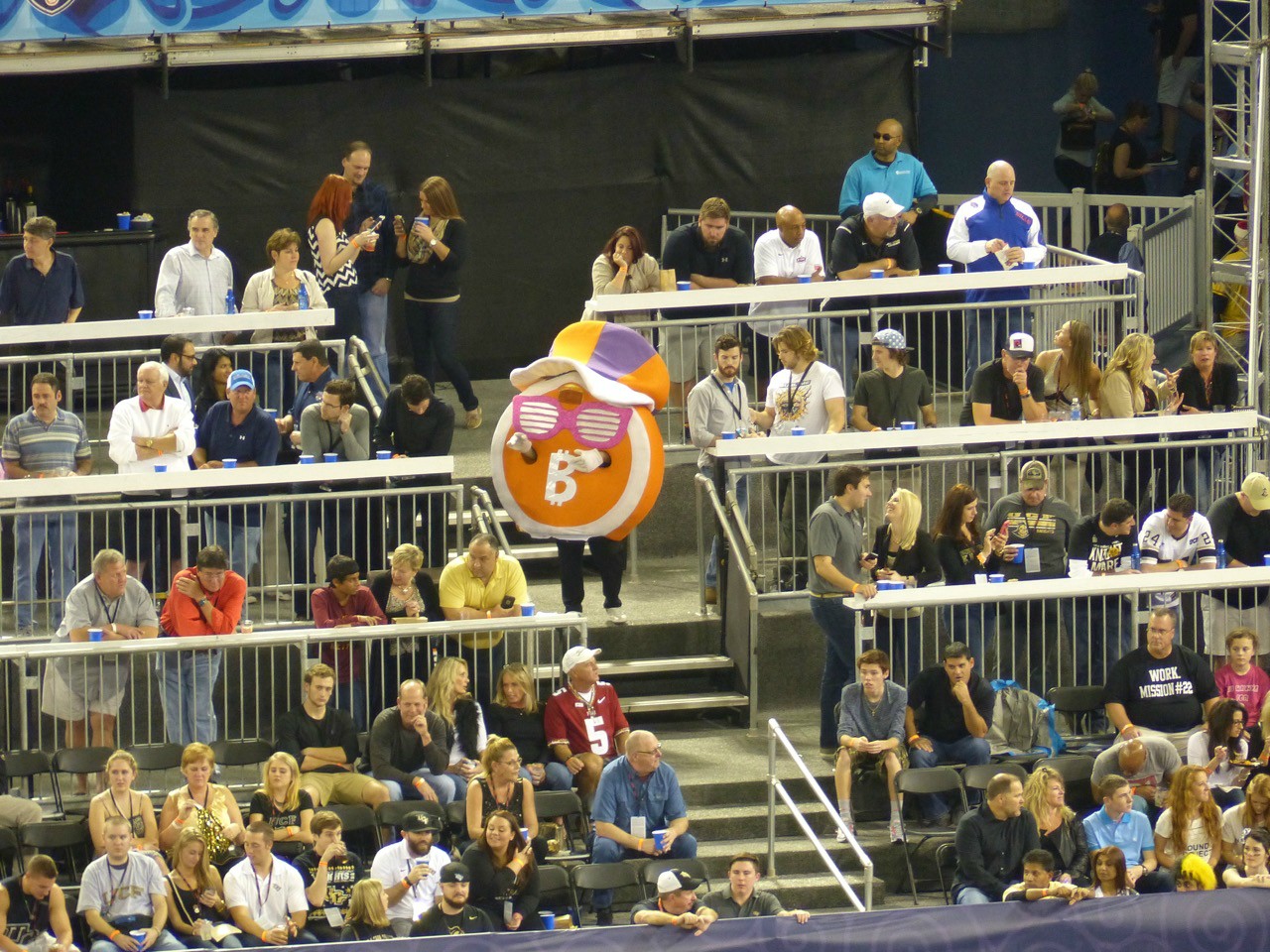 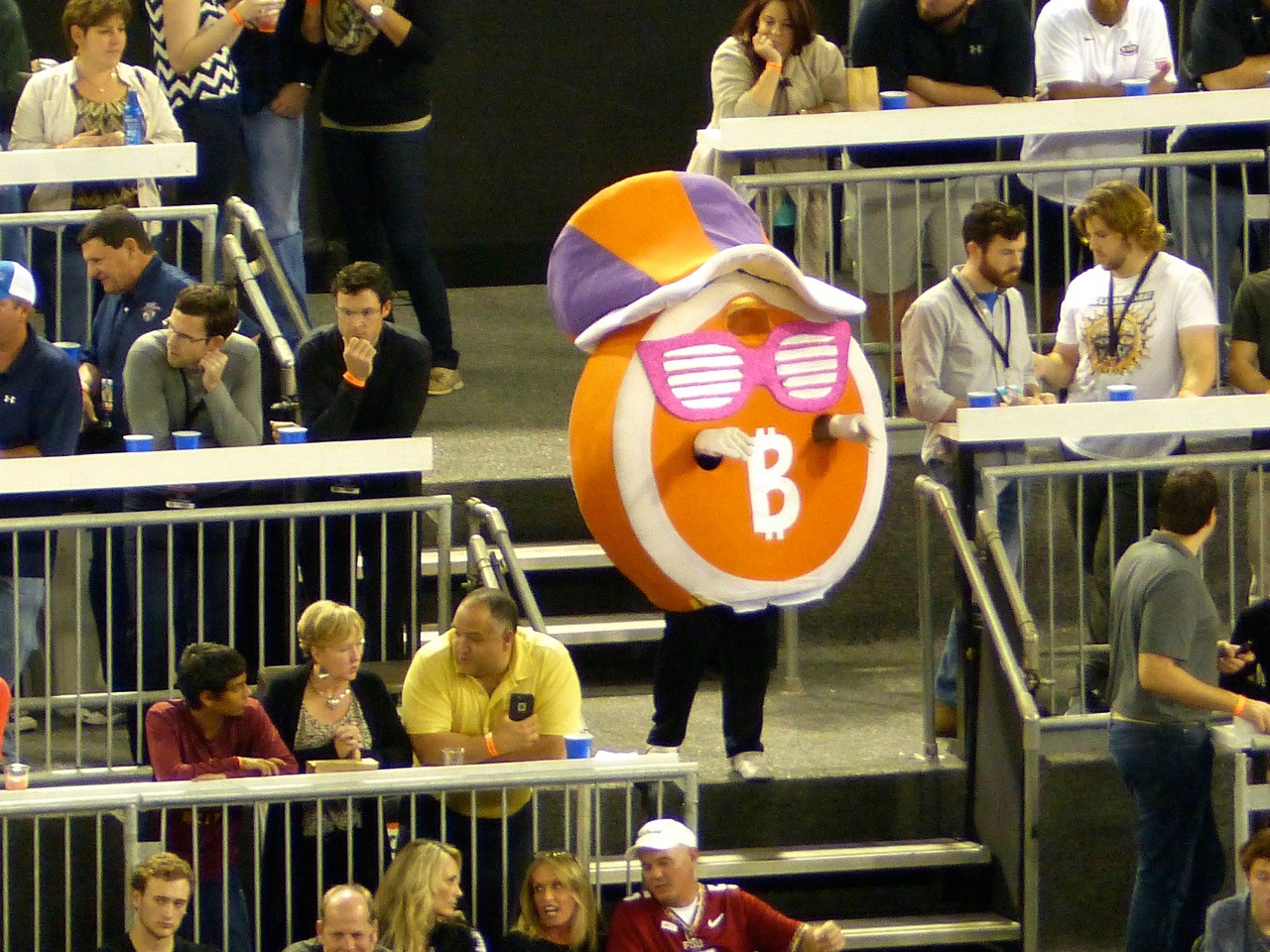 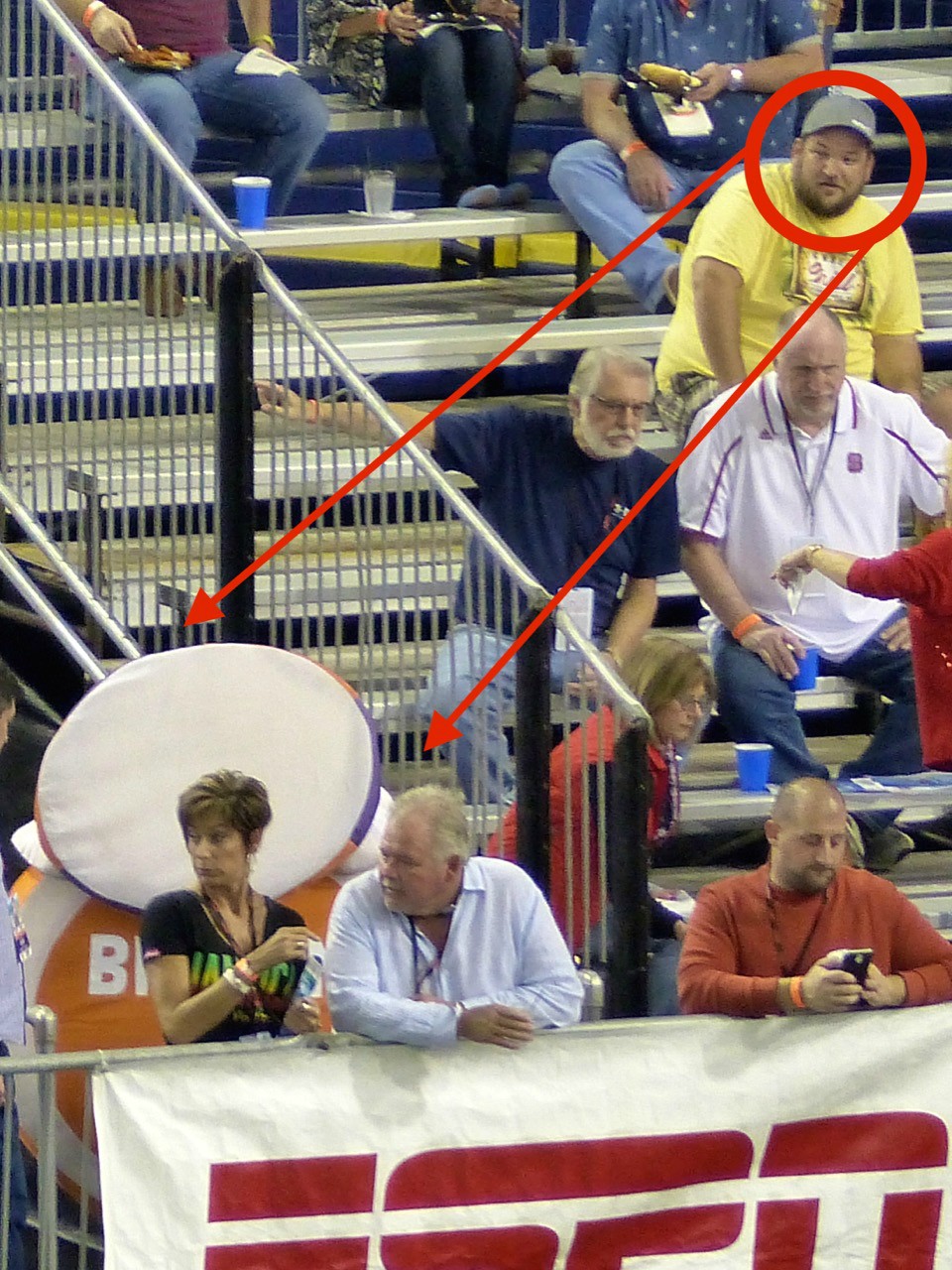 I think these are some of the people behind the magazine we all got. 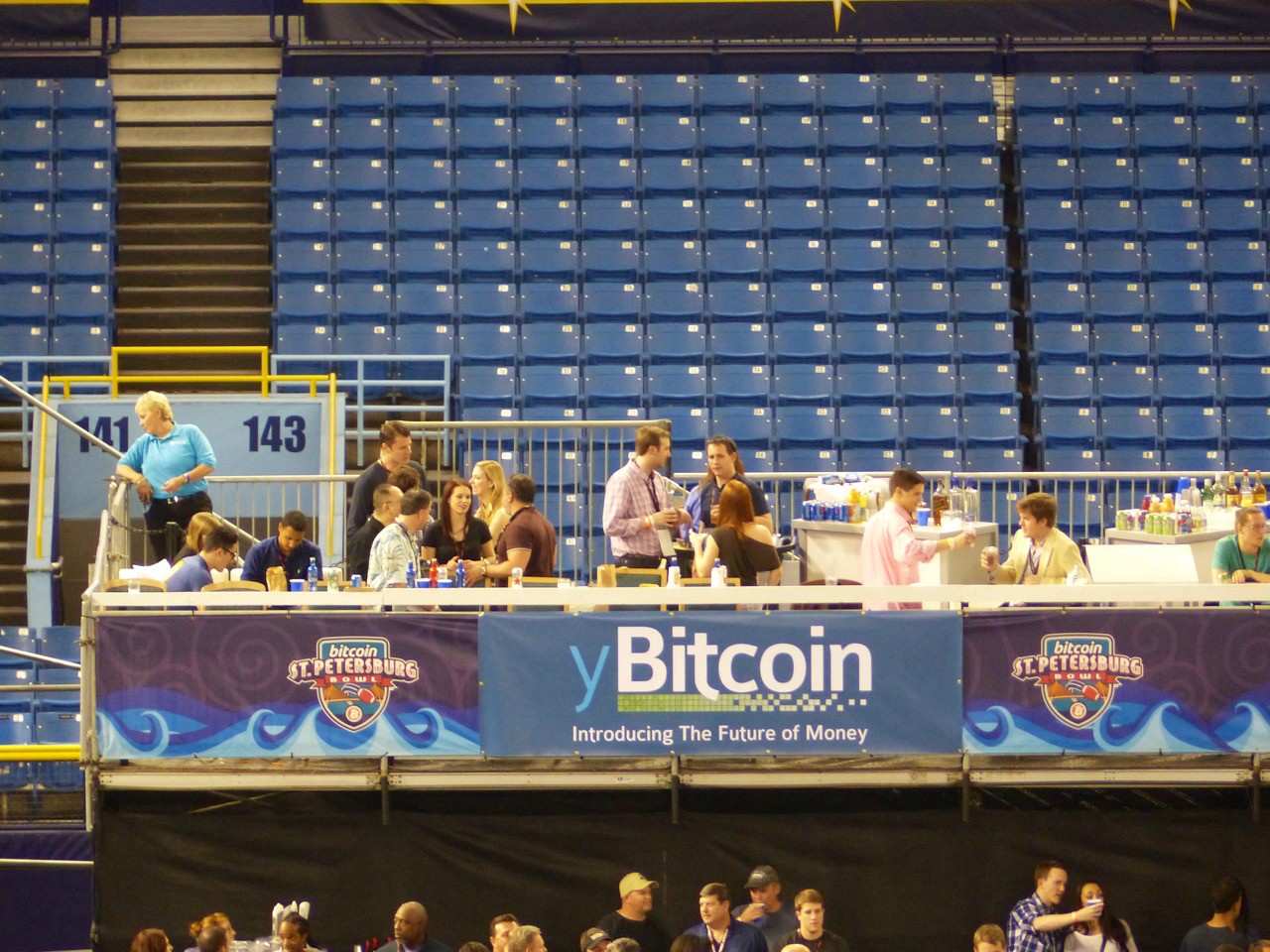 One of the other sponsors was apparently a group called ViralStyle, who look to be a bunch of classy folks. 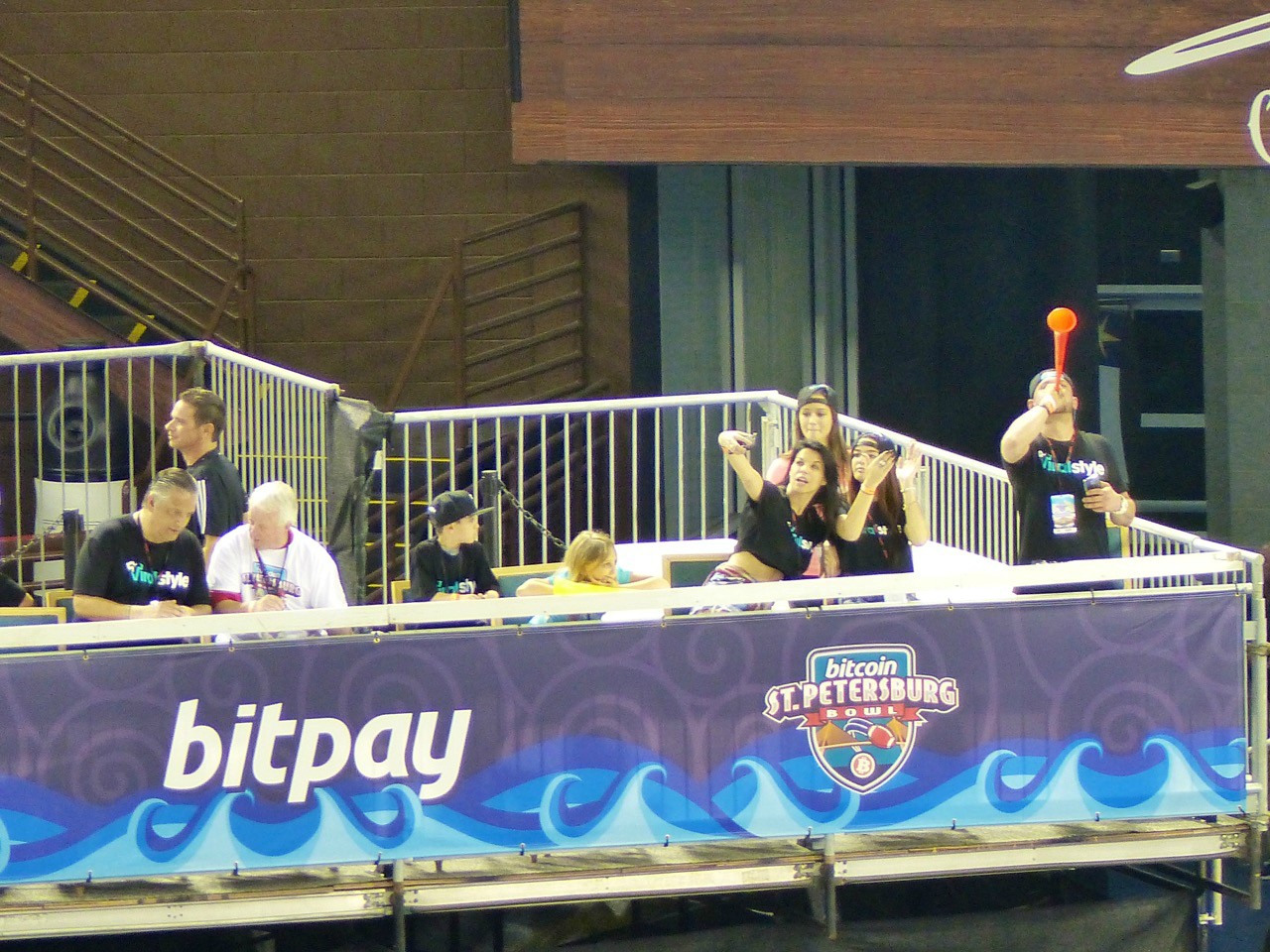 The ads played several times during TV timeouts in the stadium. Reception did not seem overly enthusiastic. 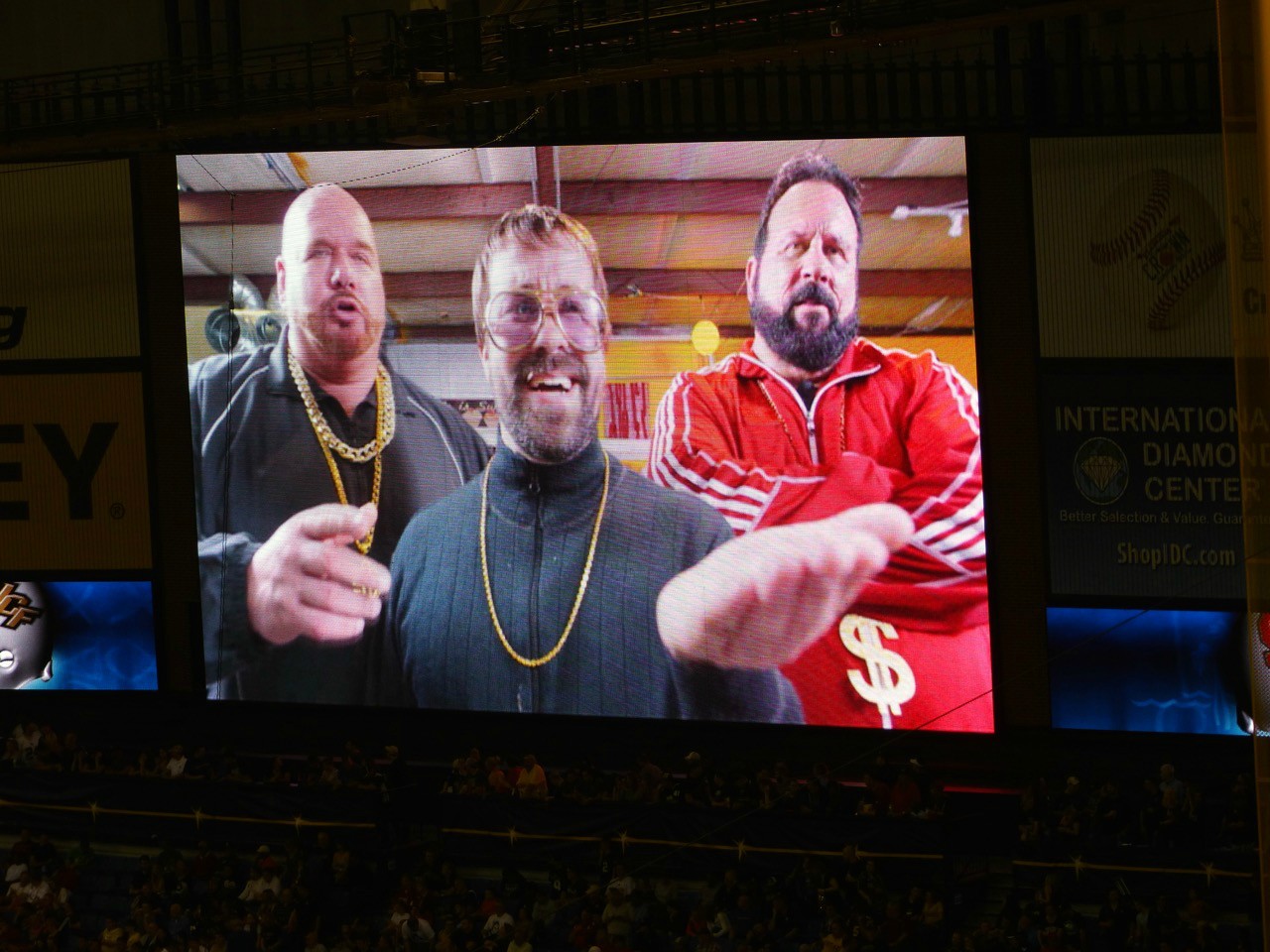 INTERLUDE: How to molest your ray 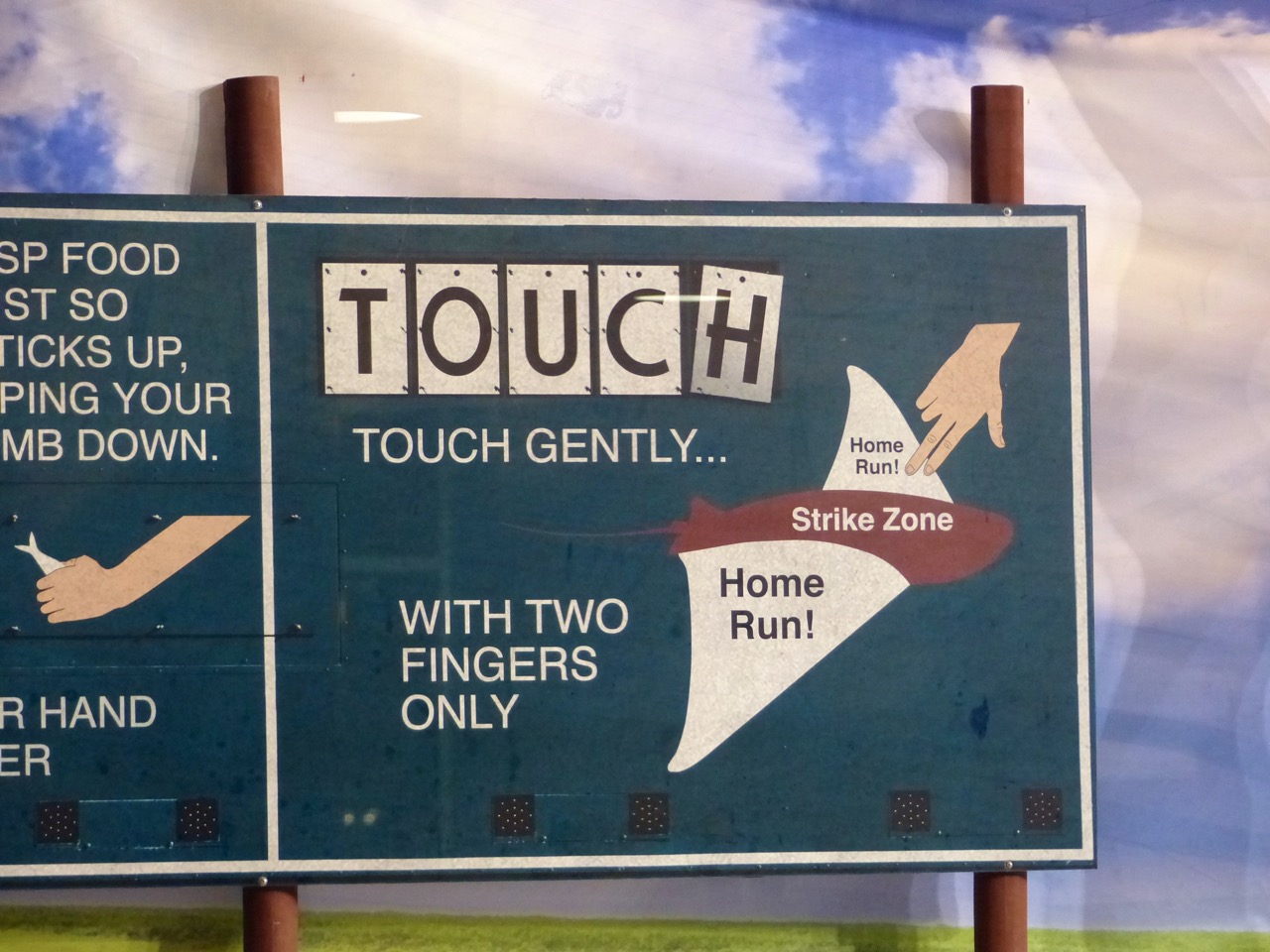 Halftime featured the NC State marching band performing a medley of Daft Punk hits. Doesn’t work so well with marching bands. We also got to see a very special moment as the Key to the City of Madeira Beach was presented to the Bitpay team. Madeira Beach is VERY proud to be the FIRST official Bitcoin City and Bitcoin Beach in the WORLD, apparently. I’m counting the days until the city is hacked and their budget mysteriously vanishes. 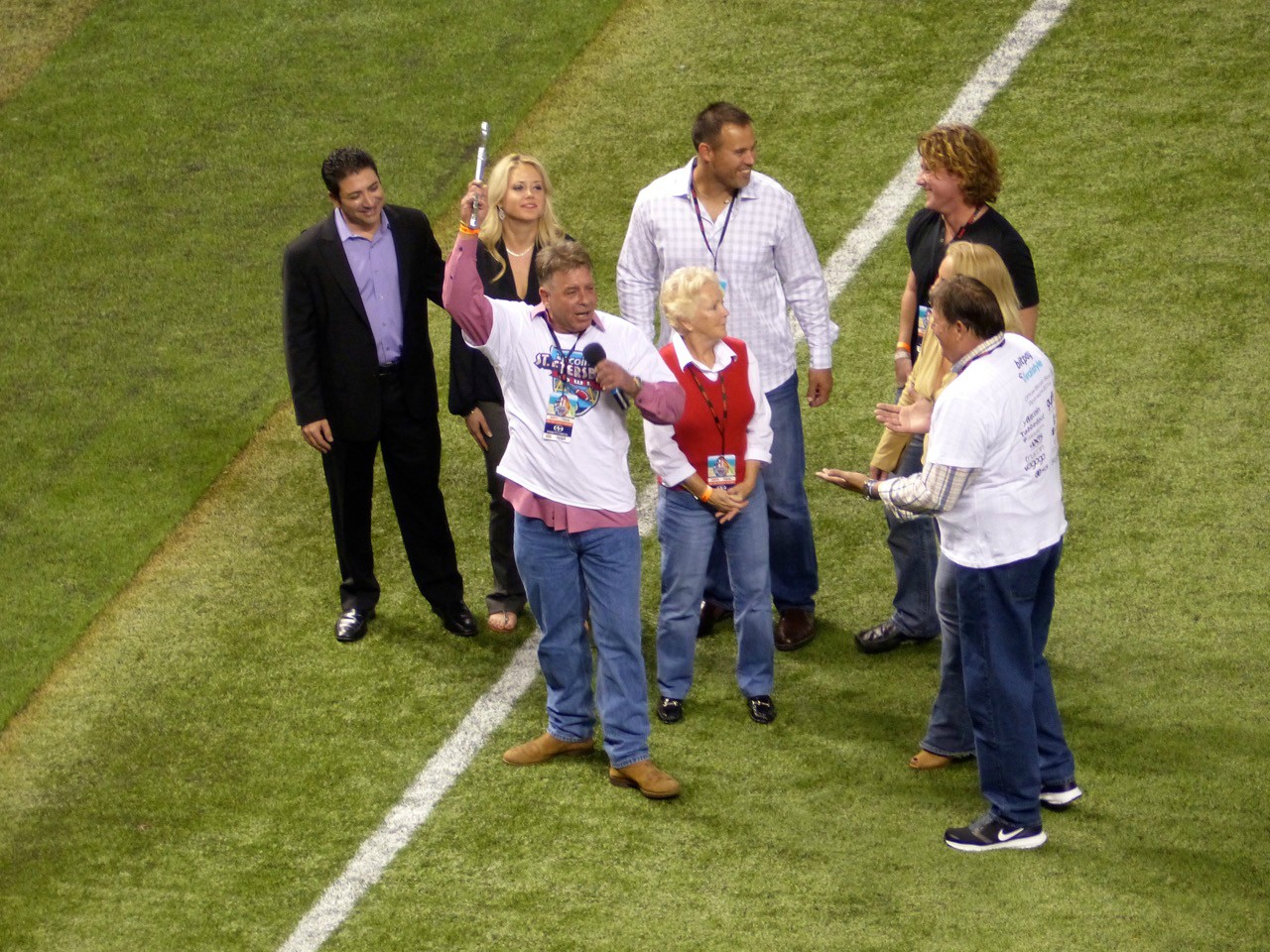 It took four hours to play one hour of football. The game was pretty mediocre for much of it, too, as evidenced by this yawning cameraman. 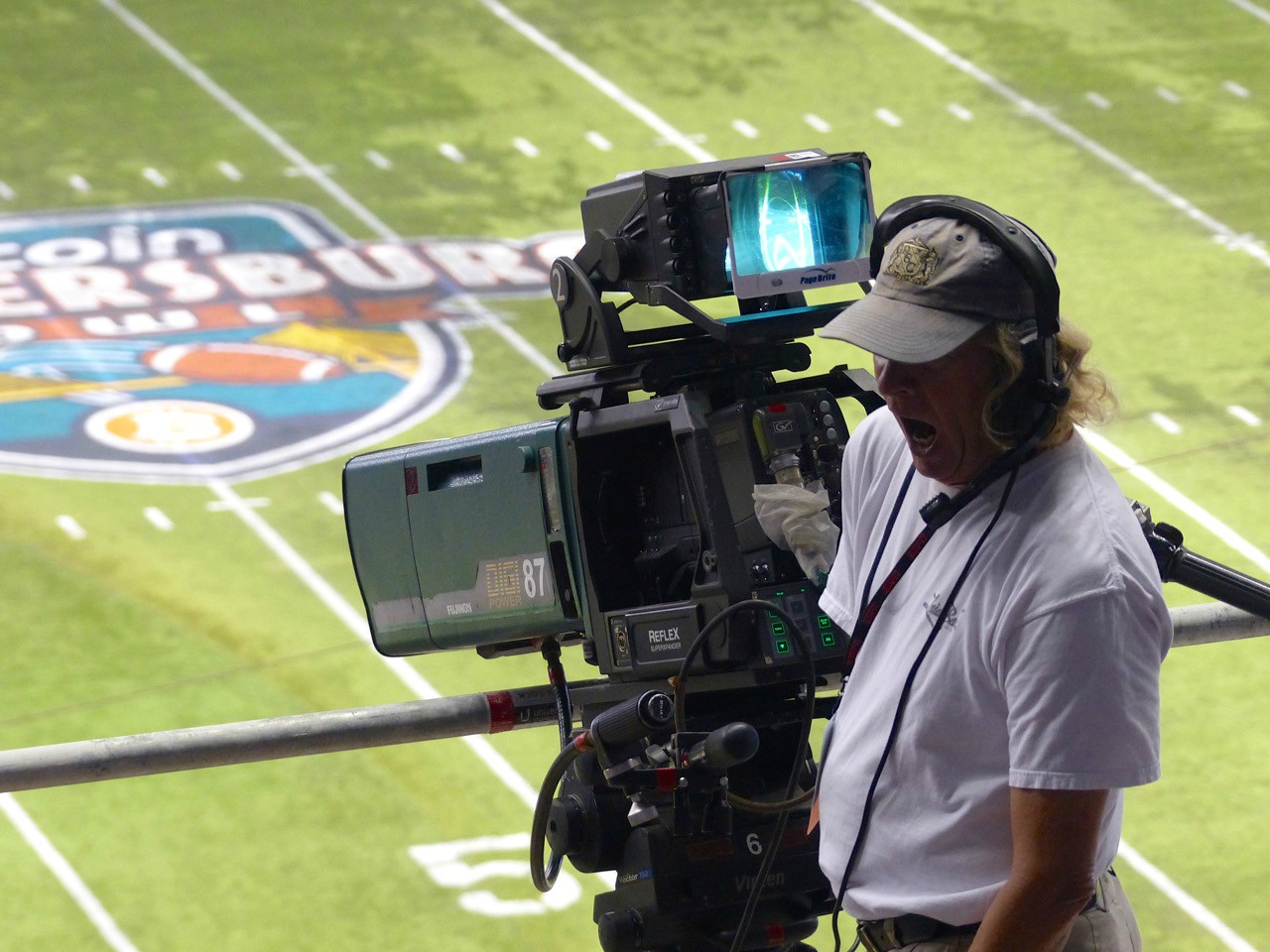 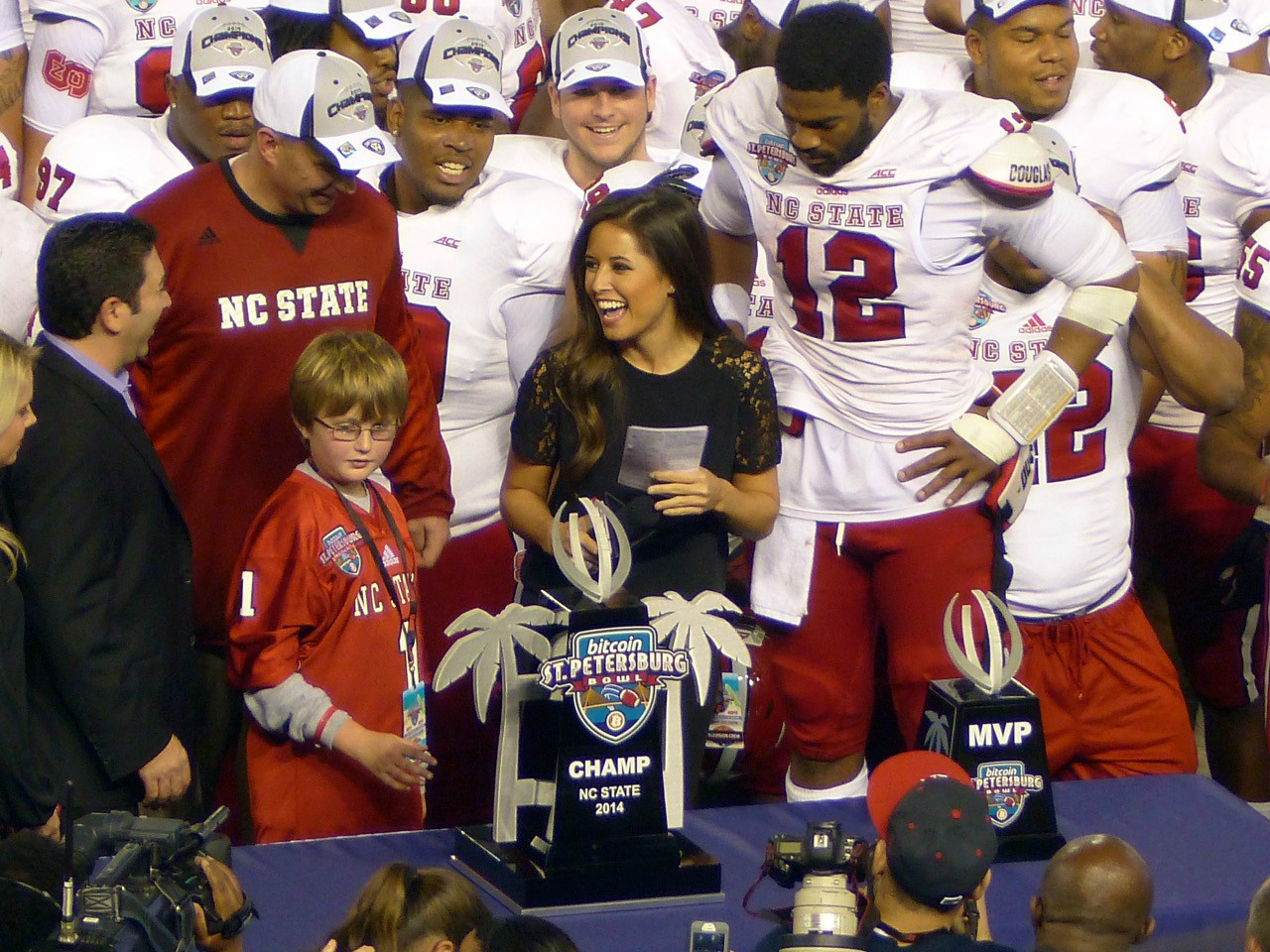 Here’s the literature that was being handed out! It’s… interesting stuff, that’s for sure. Are you bit-curious? 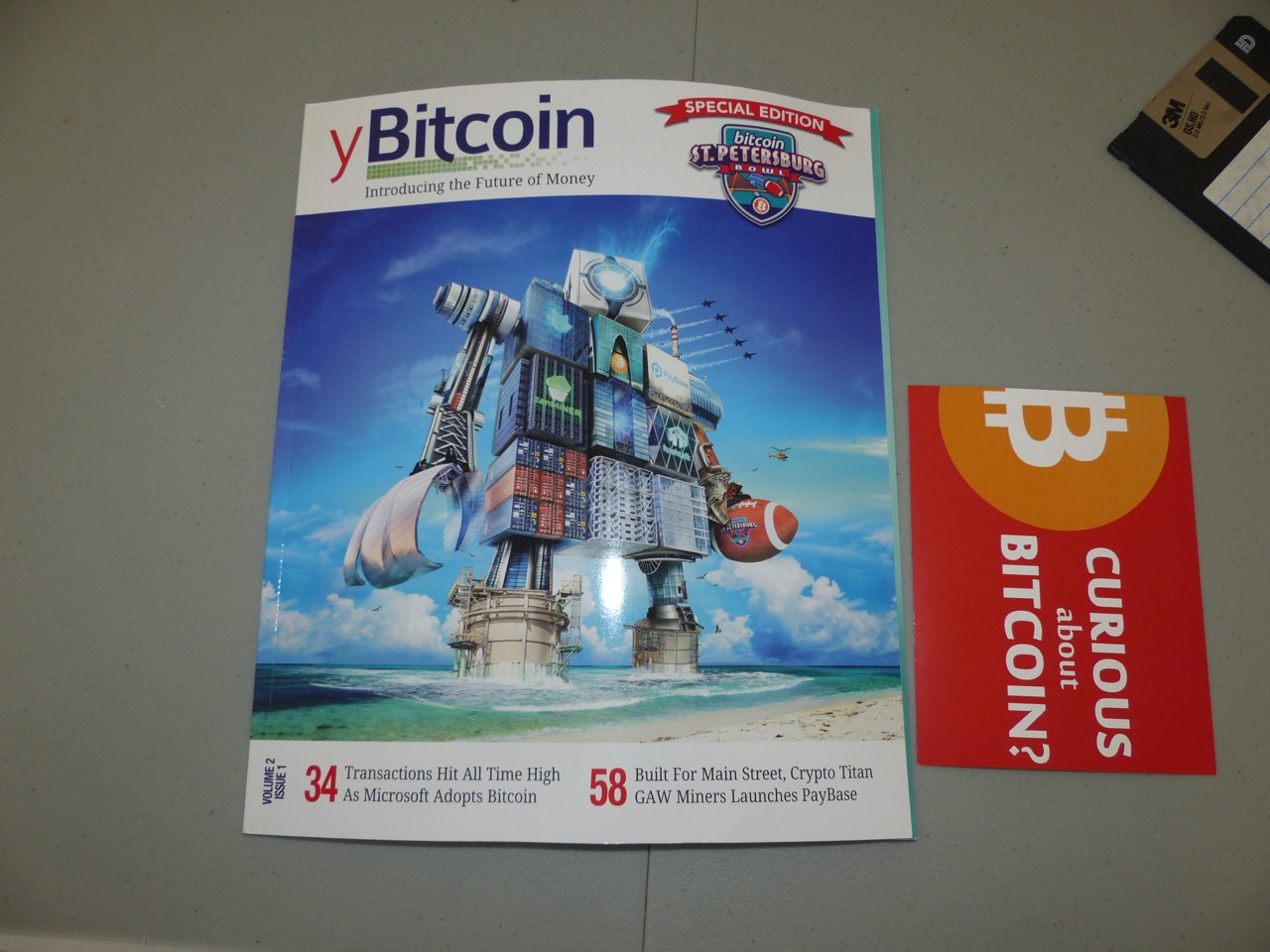 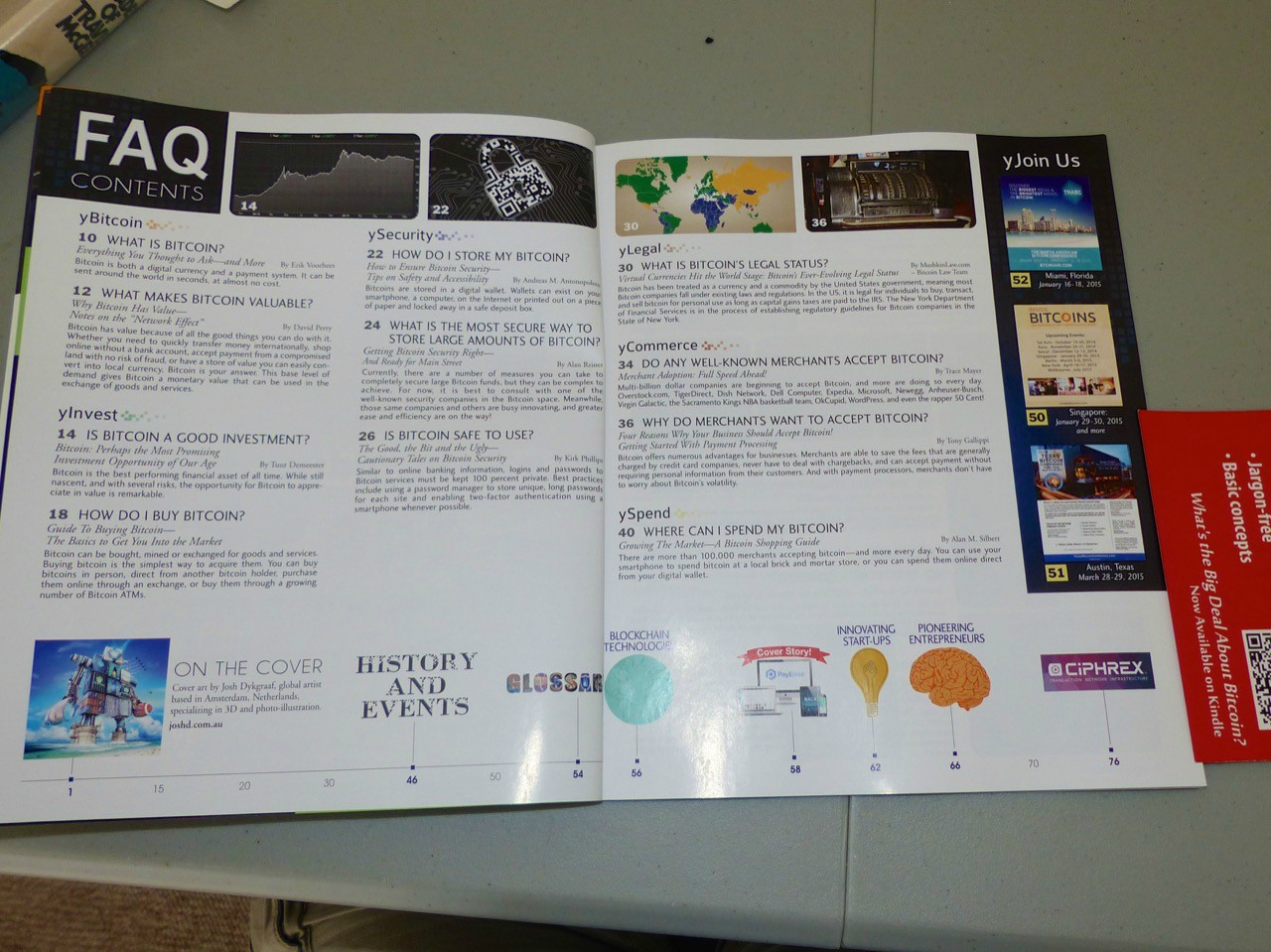 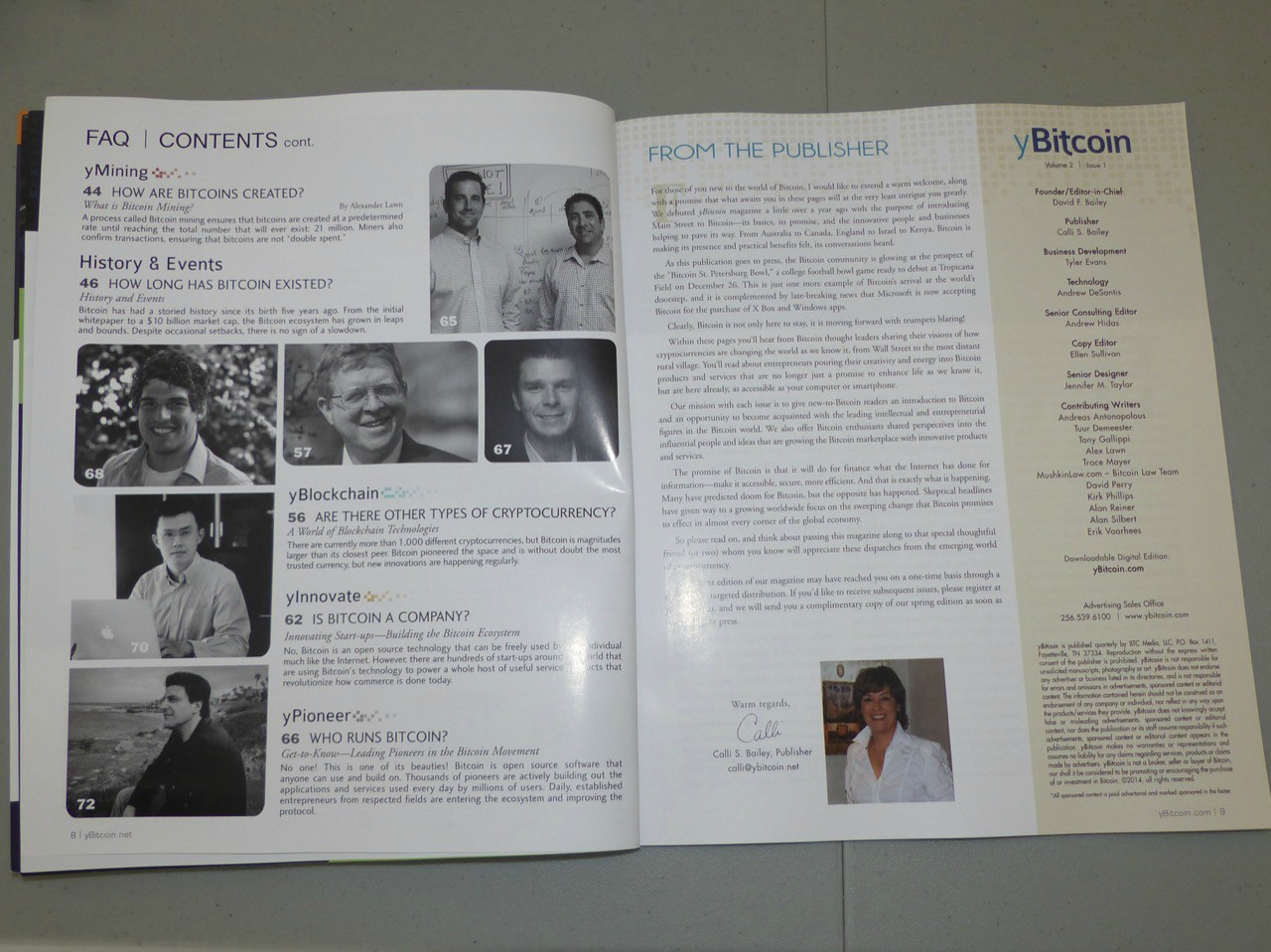 If only that wolf was colored red. Could’ve made it a Guy Fox. 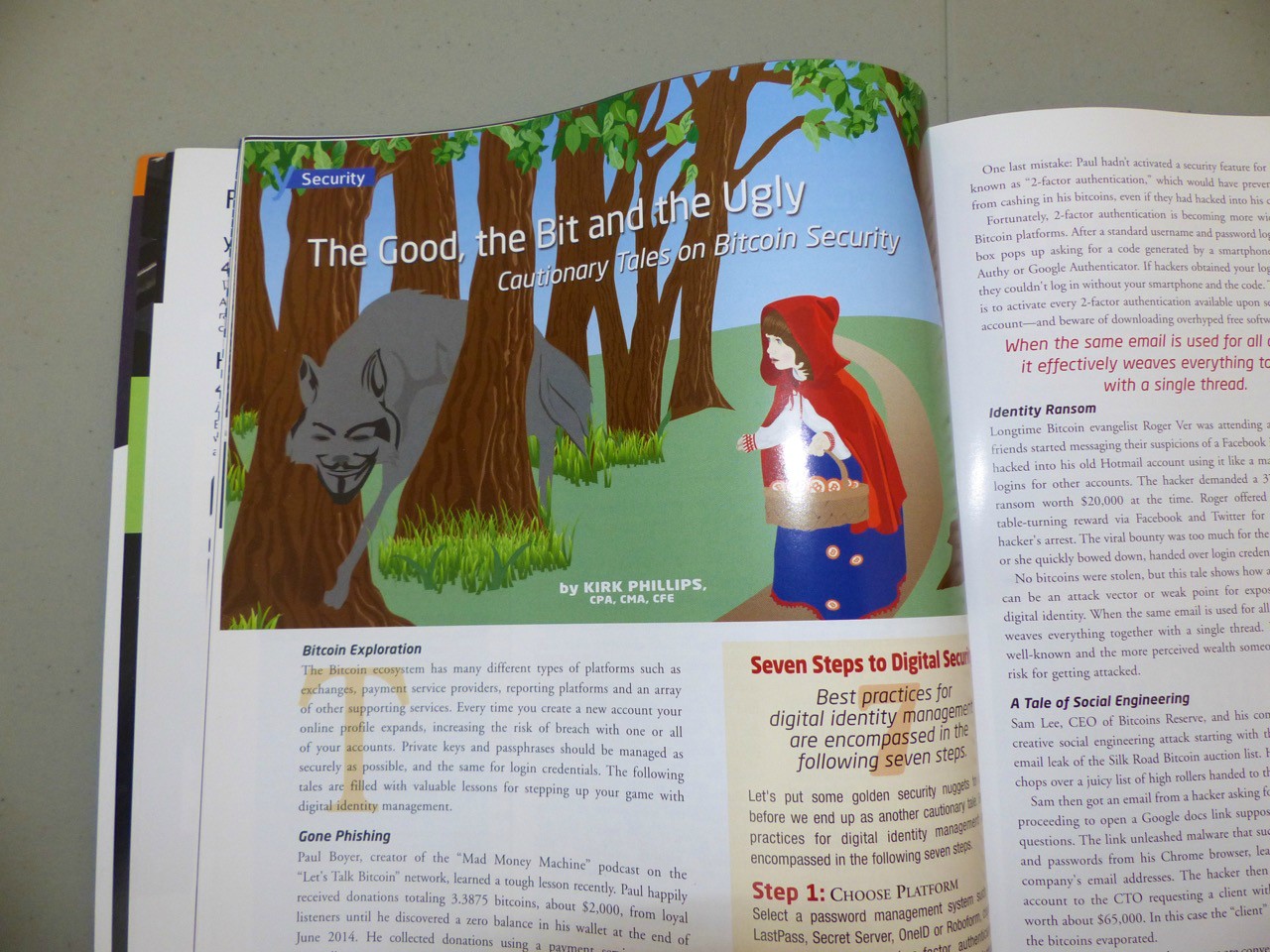 Goldbugs and Bitcoiners: a match made in scam heaven. 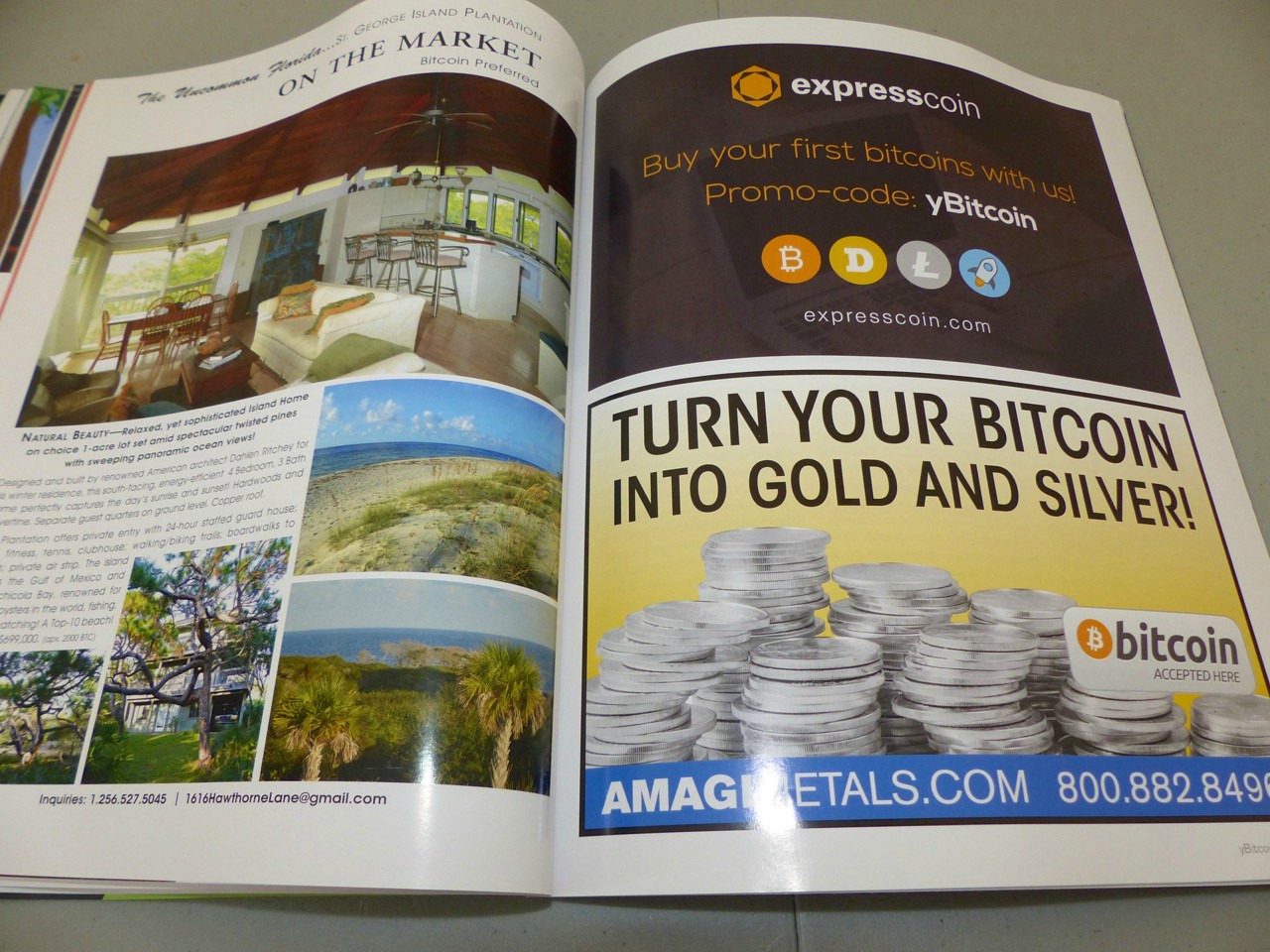 All the profiles of “innovators” are apparently sponsored content, which amuses me greatly. But it’s okay,yBitcoin magazinewriters interviewed them before writing the puff pieces, so it’s almost like real journalism, not advertising. 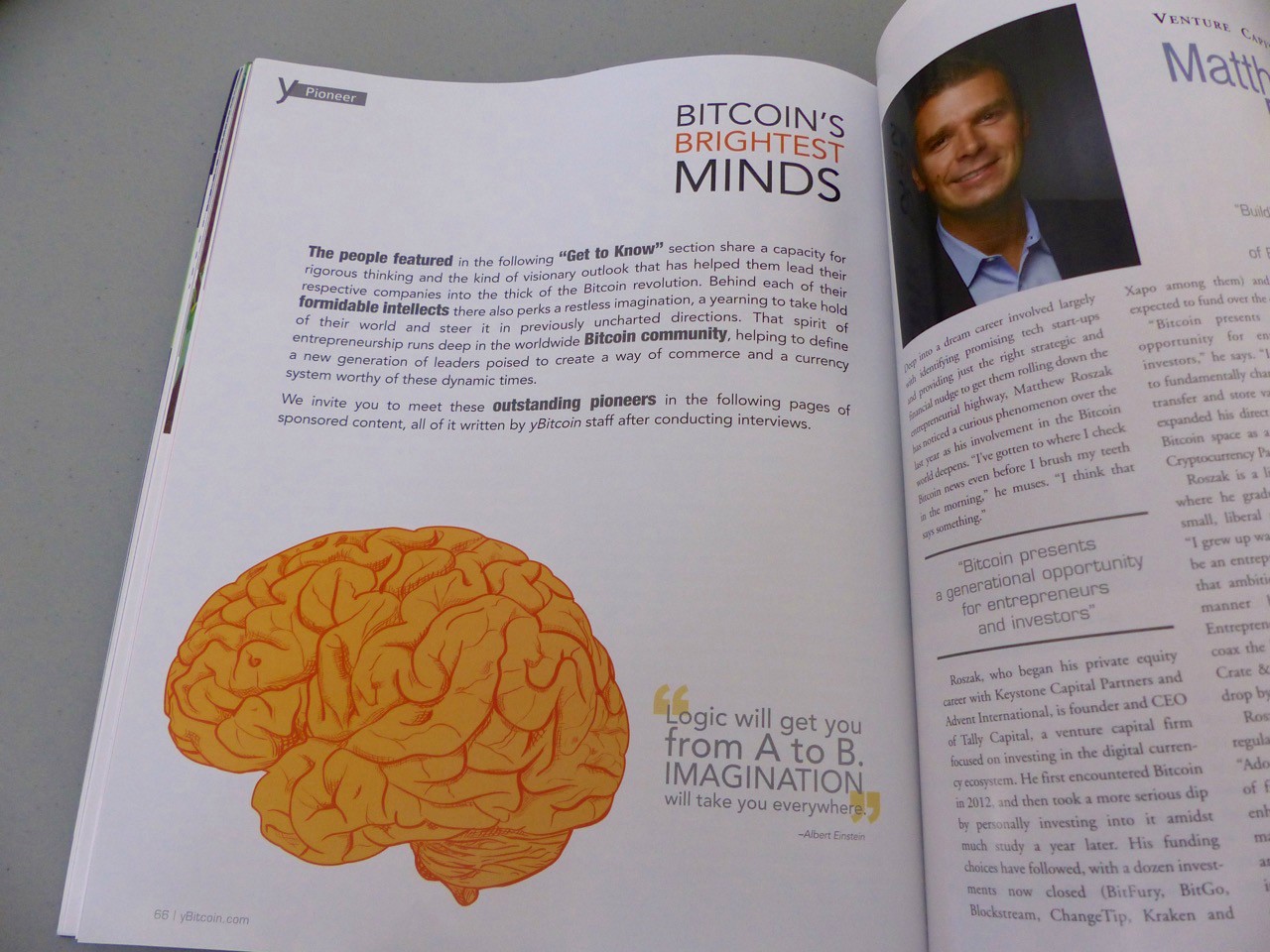 You can read the rest of the magazine yourself.There’s some fun stuff in there, and I found several contradictions between articles just flipping through it before kickoff. I recommend seeing what else you can find.

I can’t wait until 2015 finally becomes the year of Bitcoin!

‹ Butterfly Labs gets FTC injunction lifted, reaffirms they fucking rock, bro. › If Coinbase is the future of Bitcoin, then I want off this ride.