In mining news, the difficulty in mining just jumped up(uP UP) 19.5%. I wonder how many miners are going to quietly ignore taking a 20% hit in PURE PROFIT from this.

For context, this means that if some hopeful soul gets his BFL mining rig today, it’ll be churning out bitcoins at less than one-fifteenth the rate they expected when they placed the order a year ago.

Even with the residual higher price of bitcoins following this year’s bubble (currently about nine times higher), they’re still only clearing 60% of the real money that they were hoping for at the end of the day.

And that’s before even factoring in things like the tripled electricity usage. And IF they manage to cash out at all despite all the new regulatory hurdles. And IF they got their hardware today, before anything else in these numbers goes haywire. (And IF it works perfectly.)

Mt. Gox freezes all USD cash withdrawals and says you can’t have any of your money back.

Looks like that twitter post wasn’t too far fetched. Mt. Gox today announced their their big mean ol’ bank said that they were being overwhelmed by the tremendous success of Mt. Gox. (even though trading volume is at a 6 month low) and has “temporarily” suspended all withdrawals from the exchange in USD currency for the “next few weeks”. If you have money in Mt. Gox right now well tough titties, they’re going to hang onto it for a while. If you don’t like it you can go pound sand.

Over the past weeks Mt. Gox has experienced rising volumes of deposits and withdrawals from established and upcoming markets interested in Bitcoin. This increased volume has made it difficult for our bank to process the transactions smoothly and within a timely manner, which has created unnecessary delays for our global customers. This is especially so for those in the United States who are requesting wire transfer withdrawals from their accounts. We are currently making improvements to process withdrawals of United States Dollar (USD) denominations, and as a result are temporarily suspending cash withdrawals of USD for the next two weeks. Please be reassured that USD deposits and transfers to Mt. Gox will remain unaffected, as will deposits and withdrawals in other currencies, and we will be resuming USD withdrawals once the process is completed. We apologize for any inconvenience this causes our U.S. customers in the meantime, and look forward to resuming withdrawal service as well as debuting a dramatically improved trading engine which will be launching very soon.

Mt. Gox will no longer allow withdrawals for the next few weeks but will happily accept deposits and transfers just fine. You can put cash in but you can’t cash out.

MtGox also claimed that they are overwhelming the banks system. That bank is Mizuho. It’s the second largest financial group in Japan and the ninth largest in the World. Yes, MtGox is claiming the 2 week pause is this banks fault.

I wonder if they will encounter any more “delays” before they claim the Feds finally shut them down.

END_OF_DOCUMENT_TOKEN_TO_BE_REPLACED

Yet another Bitcoin business is hacked; BitInstant loses $12k in social engineering scam

You may have heard the news by now, but popular Bitcoin payment provider BitInstant was hacked last week. It wasn’t a massive hack like we’ve seen on MyBitcoin or Mt. Gox so I didn’t see much reason to write on it when I saw it 3 days before Wired’s article, but as I looked at it more I figured I’d point out some interesting points.

Over the weekend the BitInstant team has been hard at work securing our system from a sophisticated attack on Thursday evening. Overall, due to major choke points and redundancies in our system, the hacker was only able to walk away with $12,480 USD in BTC, and send them in 3 installments of 333 BTC to bitcoin addresses.

The attacker contacted our domain registrar at Site5 posing as me and using a very similar email address as mine, they did so by proxying through a network owned by a haulage company in the UK whom I suspect are innocent victims the same as ourselves. Armed with knowledge of my place of birth and mother’s maiden name alone (both facts easy to locate on the public record) they convinced Site5 staff to add their email address to the account and make it the primary login (this prevented us from deleting it from the account). We immediately realized what was going on, and logged in to change the information back. After changing this info and locking the attacker out, overnight he was able to revert my changes and point our website somewhere else.

After gaining access, they redirected DNS by pointing the nameservers to hetzner.de in germany, they used hetzner’s nameservers to redirect traffic to a hosting provider in ukraine. By doing this, he locked out both my login and Gareths’s login and they used this to hijack our emails and reset the login for one exchange (VirWox), enabling them to gain access and steal $12,480 USD worth of BTC.

BitInstant is shifting the blame totally on the host. Never mind the fact that they used real, publicly accessible information on of the owners wide-open Facebook page, this is totally the host’s fault.

Site5 has since responded since the hack.

This day and age requires us all to be security-conscious

Bitcoins are not for the casual investor

Not everyone can be a Warren Buffet and time the market just right. Bitcoins, unfortunately, seem to bring out the absolute worst financial gurus. 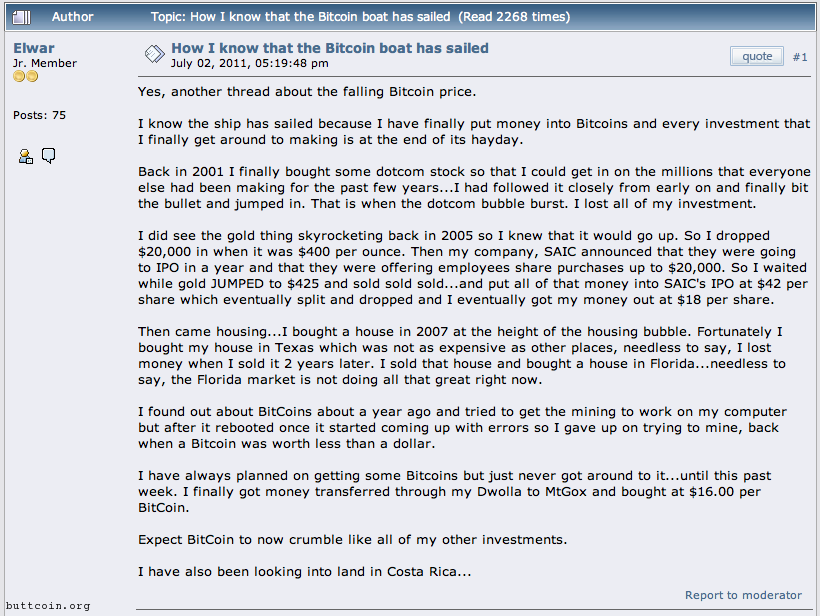 If anyone knows this guy’s info, please forward it to me. I need to be able to time my investment sells to his investment buys.

Buttcoin is a P2P currency that can be instantly deleted and lost.

This poor schmuck had a lot of money in bitcoins and accidently deleted his wallet file. Because it’s P2P there’s no central place to store your funds so if it’s gone, it’s gone for good.

That’s close to a quarter of a million dollars by today’s valuation.