Operation Onymous Did Not Take Down 400+ Sites

Mark the calenders, kids. Remember, remember, the 6th of November. That’s the day that Operation Onymous arrested 17 people, worldwide, and shut down 414 hidden sites, including Silk Road 2.0, Hydra, Cloud 9, and… that’s all we know. Seriously, those are the three sites being cited by every article. There is no official list of all the sites taken down by this joint-joint-joint-joint-joint operation. There are supposedly 414 sites down, yet no verification as to what exactly these sites are. Forbes is saying that

…the number of actual sites seized appears to be less than 20% of that number. (Source)

How the fuck people came to this number, I don’t know. So I had set out to get the full list. But then I read something else:

According to FBI spokesperson David Berman, the 400 URLs only amount to a dozen or so sites. There are many URLs to particular sites, he said. Were still going through the results of the operation. (Source)

So the sites themselves had multiple URLs, presumably for different ways to access the site and to throw off law enforcement. That’s a pretty common technique for shady stuff, like money laundering: just take the cash you got from doing crime stuff and put it in legit stuff so you don’t look shady. Neat-o! Silk Road 2, just before it was shut down for being “too freedom”, had a plan in place to restore the site with backups in “500 locations in 17 different countries” (Ironically enough, law enforcement from 17 different countries took down the alleged 414 sites). If I can recall, Black Market Reloaded had multiple addresses as well.

What the agencies are alleging is that they took down 400+ different sites, or, as Europol put it:

Hidden Services, as defined by the Tor Project, are sites that are set up to both hide people’s ID and still let them do internet things:

Tor makes it possible for users to hide their locations while offering various kinds of services, such as web publishing or an instant messaging server. (Source)

So, websites, basically. Things with an interface that people can use to do shit. Doesn’t matter what, it just matters that there is some content. The Operation seems to have only taken down the following sites (in somewhat-alphabetical order):

For the mathematically-challenged, that’s 23 different hidden services, far from 414. That list, by the way, comes from Forbes, and there is no link to where they got it from. So either they’ve been in talks with the feds or they did their own digging. But even if there are more sites, there’s no way it got to 414.

There’s also the question of how the feds broke Tor to get all this info, specifically the Silk Road 2.0 server location. No one is exactly sure, because everyone involved is saying the information is “sensitive” and cannot be divulged. However, Forbes has a quote from Nicholas Weaver, a researcher at the International Computer Science Institute:

I am 95% certain that law enforcement did a mass de-anonymization attack on Tor hidden services, … He called any link to the earlier research circumstantial. But he points out that the work the researchers did was expensive. A back of the envelope estimate suggests that whoever was running the attack on Tor at the beginning of the year using [Amazon hosting services] spent at least $50,000 in computer time, says Weaver. Thats not the kind of money an academic can spend on a hobby project. (Source)

Law enforcement may have spent $50K to get these guys. And no one is telling us officially how it was done, how many sites were really taken down, or where Obama was really born, making this the shadiest operation since, ironically, Silk Road 2.0.

Well, it may not matter. Silk Road 3 just went up.

EDIT (11/11/14): Here is the official list of sites taken down, via the Southern District of New York’s official complaint: 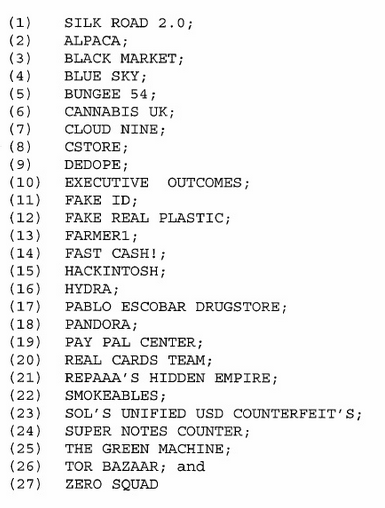 Note that our original list did not mention CStore, Executive Outcomes, Fake ID, Hackintosh & Repaaa’s Hidden Empire, bringing the official number of sites taken down to 27. Also note that the Forbes list above mentions “The Hidden Market” as a site that was supposedly taken down, but it isn’t listed here.

‹ Blake Benthall and the Terrible, Horrible, No Good, Very Bad Day › The Story Of When Buttcoin.org Sold Out And How Butterfly Labs Turned It (And Other Sites) Into A Product Marketing Machine