How to ruin your credit, declare bankruptcy and lose your family’s entire retirement nest egg in one easy step: Bitcoins!

Ohh boy, sometimes the best things happen outside of the insanity that is the BitcoinTalk forums. Today we’re looking at a very bad and very sad post over on Reddit. Some chump has decided the best course to secure his entire family’s future was to put his entire retirement savings into Bitcoins. 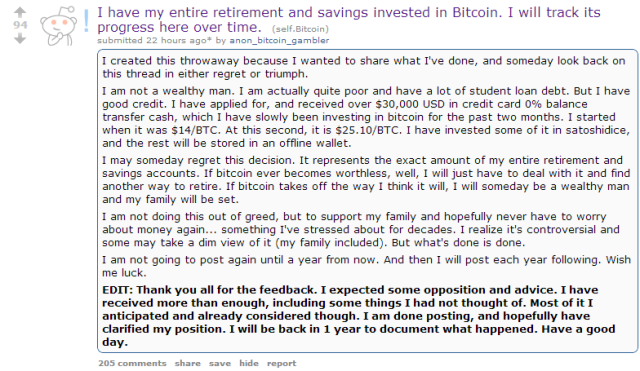 Read this part again and let it sink in how horrible an idea this is:

I am not a wealthy man. I am actually quite poor and have a lot of student loan debt. But I have good credit. I have applied for, and received over $30,000 USD in credit card 0% balance transfer cash, which I have slowly been investing in bitcoin for the past two months. I started when it was $14/BTC. At this second, it is $25.10/BTC. I have invested some of it in satoshidice, and the rest will be stored in an offline wallet.

He’s borrowing from his credit cards in order to “invest” some BTC into an online casino and some into a regular wallet file, hoping the currency increases in value forever.

You have to read the entire post to get the full extent of the tragedy here. It’s not some college kid who got too much credit. This guy is not young, he has a family, and he’s already in debt. He has not only bet everything his family has and more on Bitcoin, but he’s also of the mindset that whatever he put into SatoshiDice is an “investment”.

Some people on Reddit have expressed their concerns over his plan. He promptly waives off all their concerns because since it’s on a credit card, it’s not his money so it’s “not his problem”.

Plenty of people agree with him.

And what happens if the credit card companies won’t be so nice to him? Well, exactly what any true libertarian would say: the government will bail me out!

‹ Probably the worst combination of bad things ever › Known haven for pedophiles, racists, and misogynists now accepting Bitcoin as payment for subscriptions