This blog is now in archive-only mode! We have new outlets for expressing our excitement and contempt for all forms of cryptocurrency now!

You can follow us and laugh along with Bitcoin and other cryptocurrency projects on our twitter, @Buttcoin.

You can also talk with other global banking shills on our subreddit, /r/Buttcoin.

While we are officially putting the blog out to pasture, Buttcoin is not dead. We still hate you all.

A couple of days ago someone in our dedicated subreddit started a thread to create Bitcoin haiku. In typical Bitcoin fashion, we’re stealing it all.

“bitcoins.” and then he
laughed. but who laughs last? (the one
who laughed at bitcoin.)

frictionless money
futuristic and secure
sorry for your loss

Every Bitcoin tale
Begins with, “Fuck you, got mine!”
Ends, “Fuck, you got mine!”

hey, I liked your post
have a penny for your thoughts
WHOA, WHAT JUST HAPPENED?

To the Moon we go
Oh no, the price crashed again
Back to Mom’s Basement

Not to be outdone, SA forums goons got in on the action:

Is It Stealing if the Vendor Doesn’t See You Take It? Part 2

Meet Reddit user “btclostandfound“. On November 14th, he asked the genius Borg hivemind that is r/Bitcoin, “If I find 61 BTC on a laptop at a garage sale and I don’t return it, am I a monster?”

About 2 weeks ago I was rummaging around a garage sale (as I often do on the weekends) and found an old Dell laptop that was in fairly good condition and paid $50 for it. I’m fairly into tinkering with old electronics and such so before I reformatted the drive, I decided to go snooping. To my amazement, It had an old version of bitcoin qt on it which contained about 61 btc in an unencrypted wallet. At first i thought i was could good to be true but I was able to transfer the btc into the wallet on my computer with the help of a friend who knows way more about btc than I do. He was shocked as well. Next week I plan on selling about 1/2 of the stash on coinbase and use the money to buy a car. Am I a terrible person because i have no intention of giving any of the bitcoins back?

Now, before we continue, we should point out the following:

But, hey! He is generous:

I did give my friend a few bitcoins for helping me out.

END_OF_DOCUMENT_TOKEN_TO_BE_REPLACED

The Greatest (Bitcoin) Movie Never Made

There is an incredible thread on r/Bitcoin right now on how Bitcoin clearly isn’t catching on through its 1 documentary, so the cult should spread the ‘Coin to fiction. Specifically movies, or, to, be more specific, heist movies.

THIS IS THE BEST BITCOIN IDEA, EVER. They could do so many “Based on a True Story”-type movies, because Bitcoiners, as a community, have been scammed and stolen from countless times. I don’t even need to list examples like Mt. Gox or MintPal, just Google “Bitcoin Stolen”, and you get a list as long as long as pi.

END_OF_DOCUMENT_TOKEN_TO_BE_REPLACED

Why People Dislike the Cult of ‘Coin.

Because I’ve been doing more digging for Bitcoin-related stories, I have certain sources I tend to go back to. One of them is /r/Bitcoin. It has been one of the best spots for researching anything I have ever come across for a reporter such as myself. It’s like the all scams, misogyny and bad ideas come right to me! (But I look other places as well, because I’m not lazy, like CNN.)

I have no real opinion of Reddit. I actually kind of like it to be honest even though I personally never used it. It just seemed like some popular link site that had weird groups like the Bitcoin nuts in addition to being the homebase of the Men’s Rights movement. I got turned off by things like that and Adrien Chen’s article on Violentacrez but now, thanks to BTC, I’m back.

Throughout the time I’ve known of /r/Bitcoin I’ve figured it attracts a lot of newbies wanting to learn about the ‘coin. Seems reasonable, right? It is the first source listed in the “Keeping Up to Date” section on everyone’s favorite Bitcoin Starter site, WeUseCoins.com (now owned by Butterfly Labs).

In life, there are many things we know we don’t know. There are things we know that we know. There are known unknowns. But what we do know is that there are 76% of Americans don’t have a clue what a Bitcoin is. Either they don’t know its a thing, or they don’t really care. In the same survey linked above, 80% of people said they’d rather have Gold over Bitcoin, probably because Gold is easy to explain and, economically speaking, proven.

But what about those few who genuinely want to know more? What about the men and women who are genuinely excited about such a interesting concept? Those who want to dip their toe into “The Currency of the Future”? What does the Reddit Bitcoin community, linked to by many of the most prominent Bitcoin introduction sites, do to help them, the newest of newbies, looking for the most “Up to Date” info?

The answer is just harass them, apparently.

END_OF_DOCUMENT_TOKEN_TO_BE_REPLACED

Business Owner sounds off about Bitcoin Missionaries trying to convert him, the flock does not take well to dissenting opinions.

In a Reddit thread where the Bitcoin community tries an outreach program to understand why someone who understands Bitcoin would still have a negative view of it, a lone small business owner speaks up (now edited) and offers an insightful opinion on why he doesn’t think that Bitcoin is worth the trouble for his shop:

I am a business owner. My sole interaction with Bitcoin comes from Bitcoin missionaries.

Not a single Bitcoin missionary has come in that hasn’t raised my ire. From being told that it’s “natural for older people to fear technology” (I’m in my 30’s) to being told that Bitcoin will allow me to make “real money”, it’s been nothing but a condescending shitshow of buzzwords.

It doesn’t save me money on credit cards. Don’t bother, I’ve walked through this with them before. But then they say “Well, what about POLITICAL reasons, hmm?”

If I’d listened to the kids who come into my store, I’d be locked into a bunch of $1000 coins lost in Mt. Gox. Then, later, I’d invest in that new business-minded bank, Neo Bee, which would help me with all my commerce needs! Then, to top it off, I could get a Robochain ATM to further bilk my customers.

There’s a never ending swarm of condescending college kids trying to pitch me ideas that end in disaster over and over. I’ve written about them before. Remember the whole “YELP LOVES BITCOIN!” thing? Yeah, I had to scrape those fucking “promo” stickers off my door.

The thing is, like I said, Bitcoin doesn’t help me. But you know how I hear about Bitcoin? From the same type of people that come in trying to get me to sign up for “United Electro Company TO SAVE BIG MONEY!” or “Totally not a scam ATM Company TO MAKE YOU BIG MONEY!”

And, like I said, it doesn’t help that I keep getting pitched ideas that fail. Plus, as much as you guys talk about how it isn’t about the price, you should connect to the guys handing out pamphlets business-to-business.

There is literally no difference in behavior from someone coming into my store trying to scam me, and the Bitcoin people. Same behavior, same pitches, same everything.

So now when an awkward kid dressed in their dad’s ill-fitting suit come ins, dragging a buddy and pamphlets, we play the following game:

Reddit, in their ongoing effort to seem friendly to newcomers and help them understand the nuances of the technology and how it can better their lives, puts their best foot forward and respond to common criticisms.

They call him a liar, a troll, and try the same tired schtick he’s just got done explaining that he’s heard a million times before.

END_OF_DOCUMENT_TOKEN_TO_BE_REPLACED

Bitcoin documentary “The Rise and Rise of Bitcoin” finally came out after numerous delays and attempted community revolts. Reddit is thrilled that this important new piece of Bitcoin history has been crafted and intends to fully support the artist and everyone who dedicated the past 2 years on this project.

No wait, they just want free shit and the “tipping economy” is is an entire joke.

The comments on the torrent page are just as wonderful 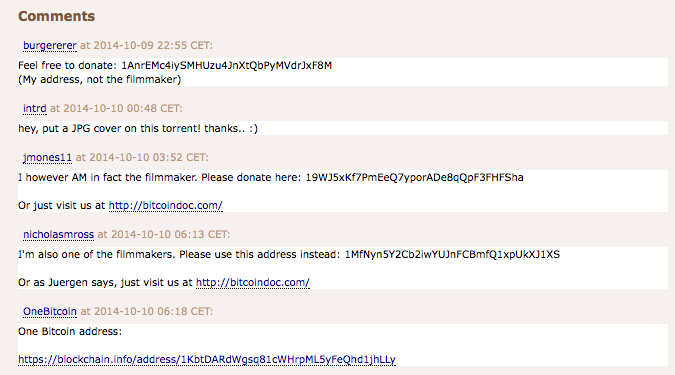 BTC as seen on TV

Recently a bitcoiner asked /r/bitcoin for ideas for a television commercial for Bitcoin. The results were predictably awful. Thankfully, SA forums goon Ghostlight gave them a helping hand: