Butterfly Labs has a long and horrible history with their mining rigs. They started taking pre-orders over a year ago, with a ship time sometime in late July. After numerous delays in production, shipping problems and general incompetence, the only thing they’ve managed to get out the door are some of their tiniest miners, the Jalapenos. And those mainly ended up in the hands of reviewers and blogs in order to keep pumping the Butterfly Labs hype train and securing millions of dollars of pre-orders still in limbo.

Lucky BFL forums user Luke-JR however scored a sweet Mini Rig from Butterfly Labs (it’s just a coincidence he’s a driver developer for them I’m sure). This rig was originally promised to produce 1500 GH/shashing power at 1500 watts for $30,000, but has since seen it’s hashing power slashed to a third of what was promised and it’s power consumption increased 75%, now just offer 500 GH/s at 2400 watts. They’ve promised to make good on pre-order buy sending out 3 rigs to match the initial hashing rate, so now it’s only 1500 GH/s at 6900 watts, a reduction in GH/Watt by a factor of 5. 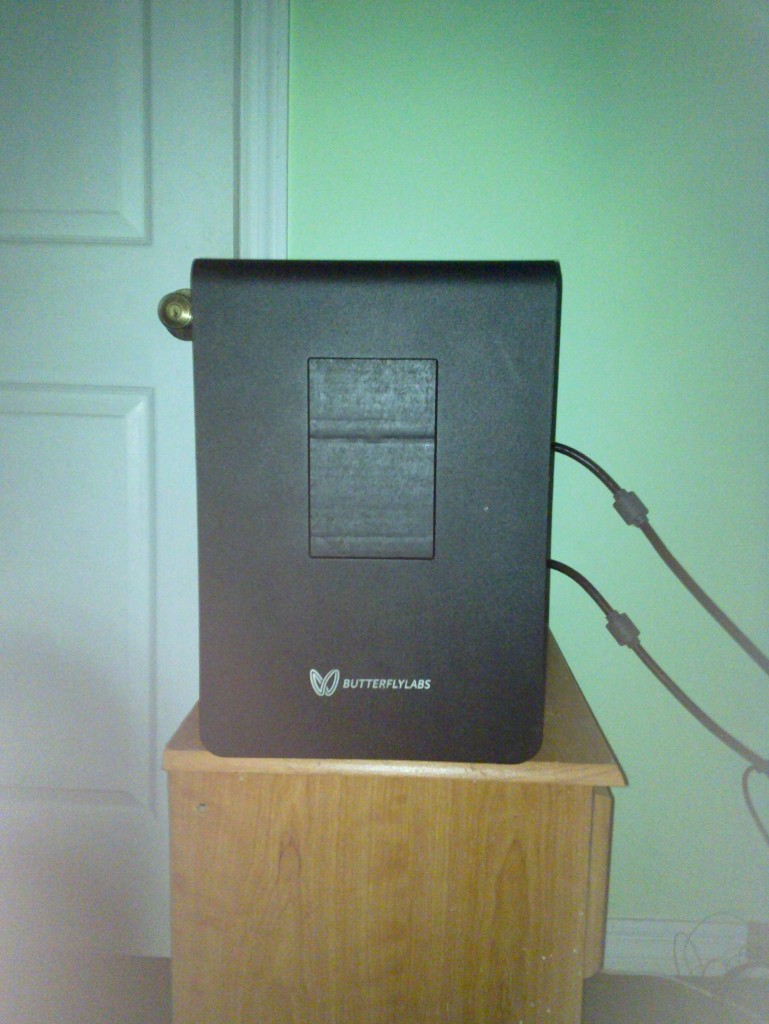 FedEx apparently dropped it somewhere along the way, and the weakest part of the case, the thin metal part around the back of the PSU, broke. 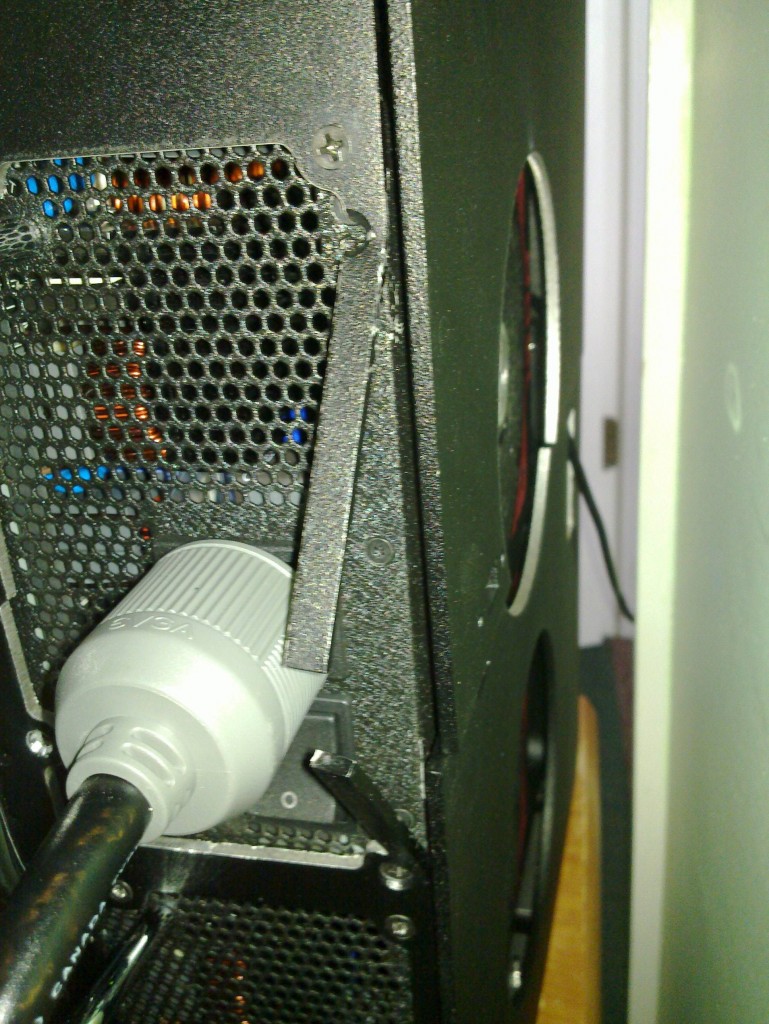 I’m not sure how sturdy the back side was supposed to be, but its two pieces aren’t quite together either. 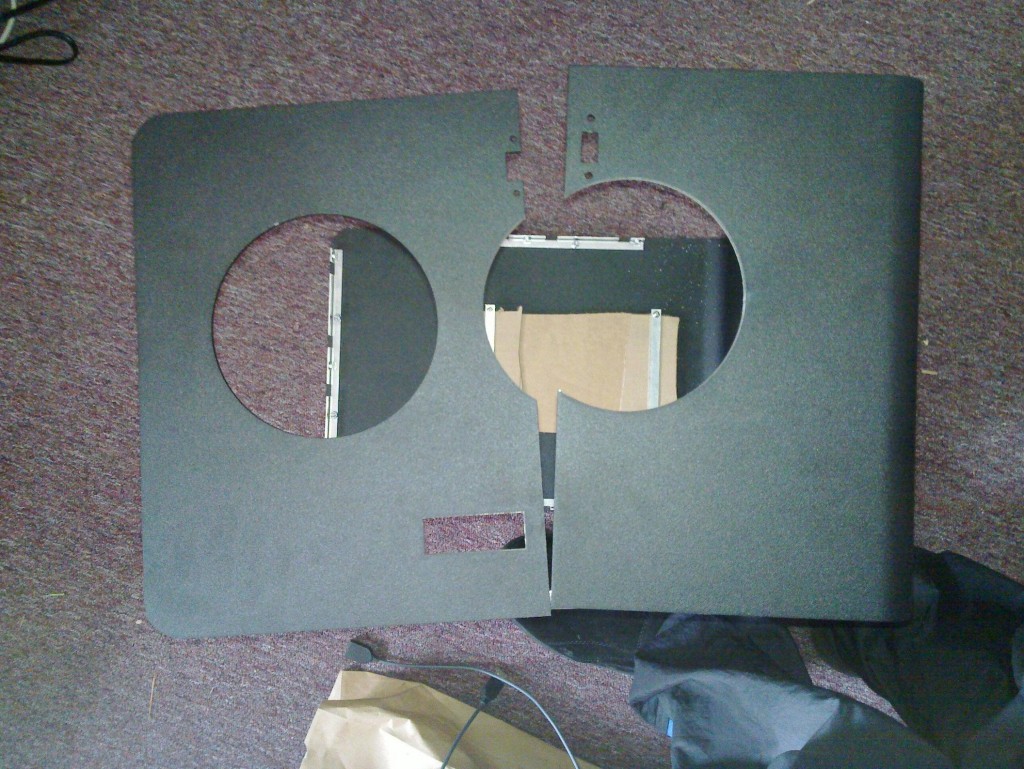 The power supplies (EVGA 1500W) also created havoc interfering with the neutral on the power line. This disrupted X10 communication significantly enough that the pool overflowed because the system controlling it was unable to turn off the pump. Workaround: This PSU supports 240V, so we rewired the outlet. 240V does not use neutral, so now all should be okay.

Edit: 240V workaround is only partial. Still having problems

But the good news is, it all seems to be working for the most part.

Next up, installing it in the window so the heat goes outside

A twenty two thousand dollar box of electronics that is broken out of the box, that required the guy to do a sketchy electrical workaround to getpartiallyworking, that he is going to install in a window… and he’s happy about it?

In case you didn’t notice it, the delivered unit is different than the picture on the website. They had to install 2 power supplies instead of 1 and had to modify the case to fit. Also, if you didn’t notice, the LCD/Phone thingy in the front has been replaced by … a piece of cardboard spray painted black. Wonderful.

You could maybe chalk this up to a careless Fedex postman, but when you’re shipping something that costs as much as a mid-sized sedan, how bought putting a little more effort into packing? Dell and HP can ship bigger and heavier servers across the world without this kind of problem.

The unit had to hit its huge power draw increase by putting dual EVGA consumer grade power supplies in the unit.We’re talking almost a 75 amp load (6*1500/120), disregarding power factor. He could very well overload the circuit panel and trip the main breaker for the house.

Let’s take a look inside this guy. This is apparently from an earlier FPGA but it will give you a good glimpse at what kind of craftsmanship you can expect from a computer that is half the average household income in the United States. 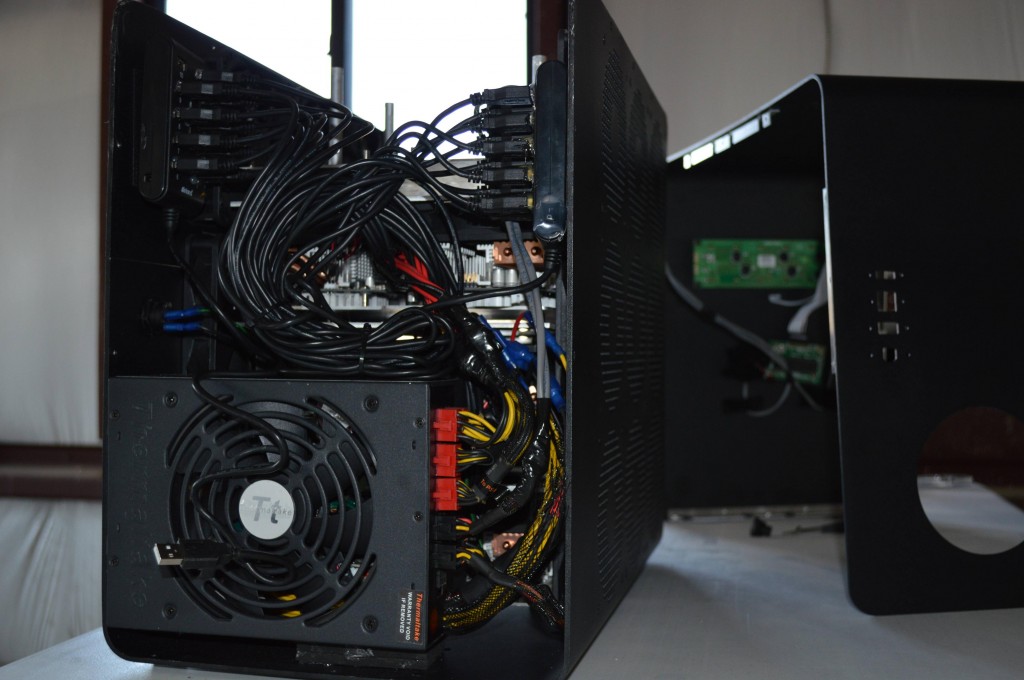 Consumer grade PSU and cheap USB hubs glued to the inside case. 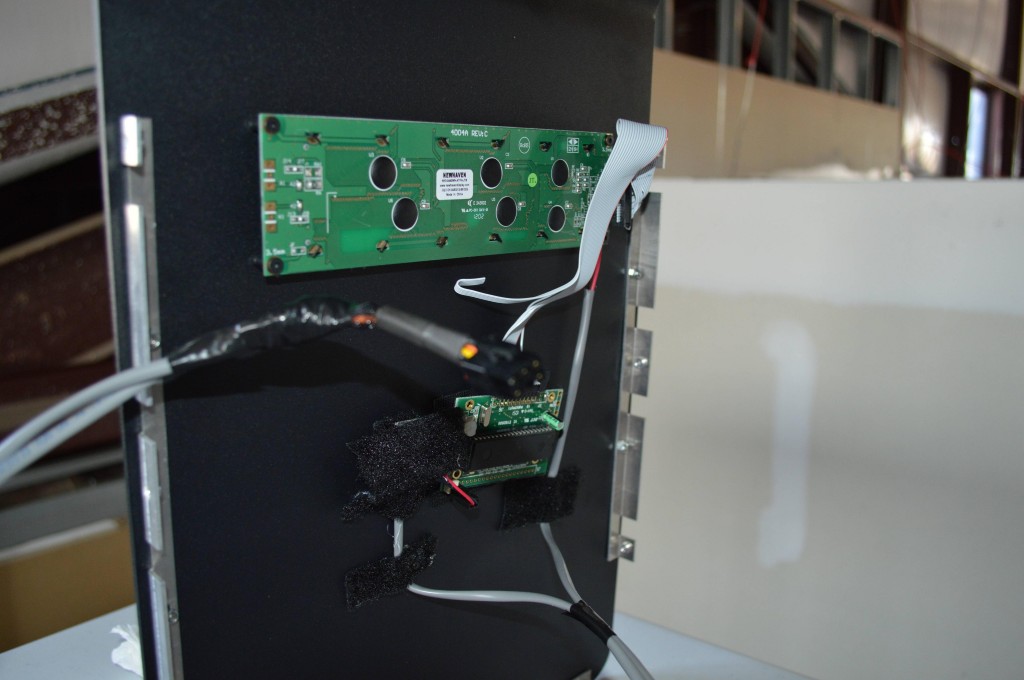 Electrical tape and random velcro glued to the insides 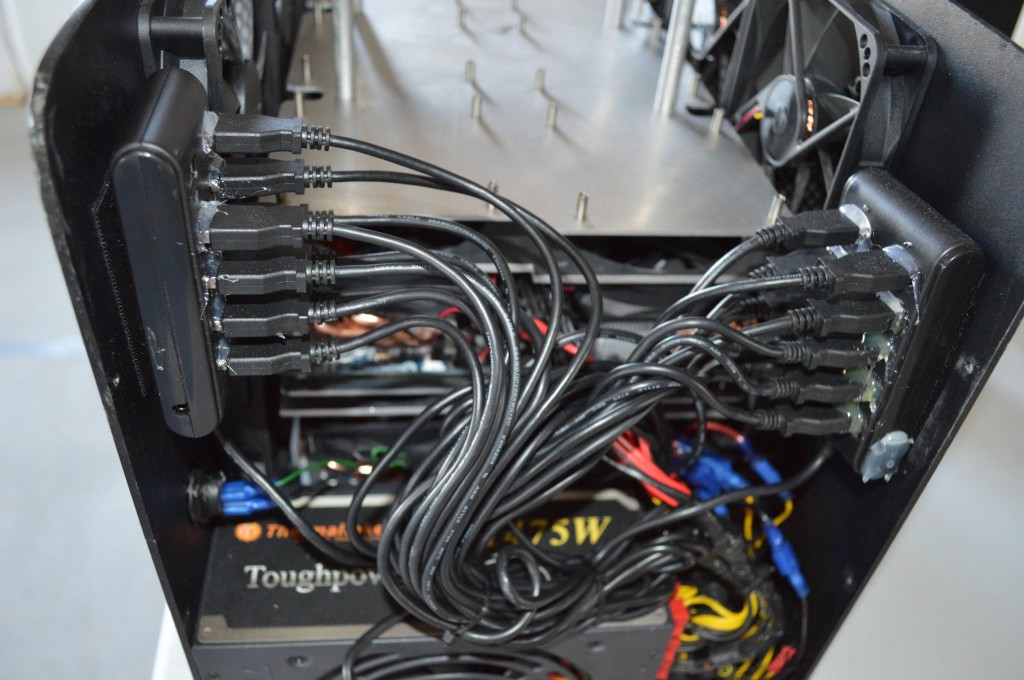 A closer look at the USB hubs. Plugs are hot glued to stay secured. 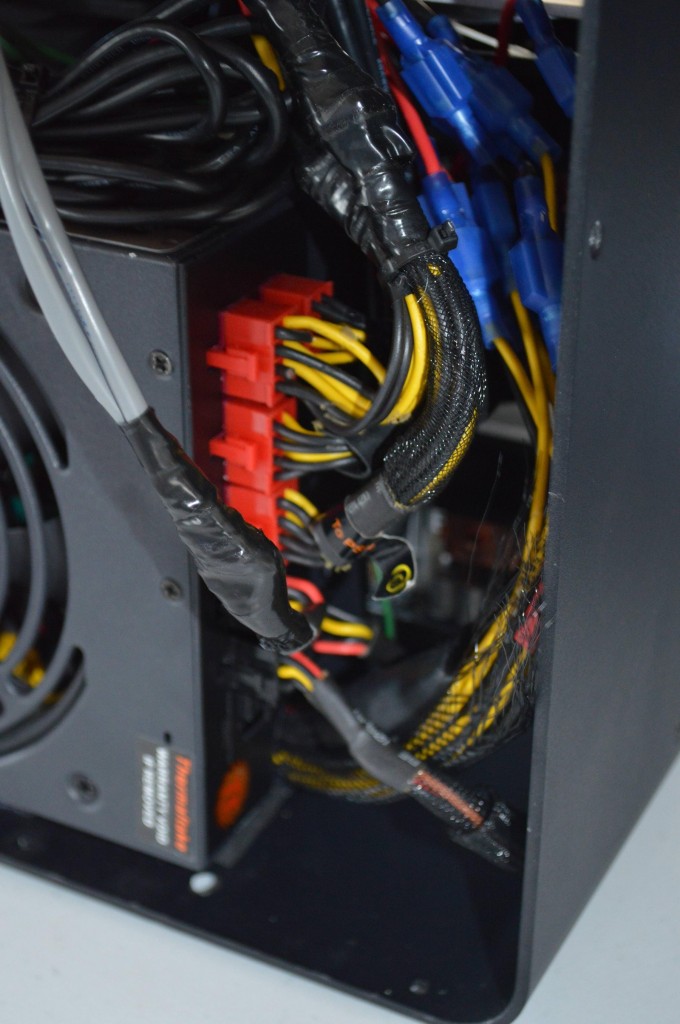 Electrical tape everywhere, splices and voided hardware are the theme.

You can view the entire album here.

Despite all that, this thing can still mine bitcoins and it should be profitable. Keep in ind that many people jumped in on the preorders a year ago when bitcoins were still hovering around $6.50 per. Meaning customers paid 1562 bitcoins for that particular piece of shit, which at today’s value is $156,200. Aston martin money. How long will it take them to make their money back? If the difficulty didn’t change, they would make 37 bitcoins a day and recoup the initial investment in 124 days. Difficulty is jumping pretty much 20% every 12 days or so, so in the next week before adjustment, they’ll make 259, the next 12 days 369, the next 12 days 312, then 256, then 213, etc.

So by day 127, they’ll be halfway to breaking even, but by day 151 they’ll be making less than 5 bitcoins a day, and even if difficulty stopped rising at that point(which it won’t), it would take another 435 days for a total of 586 days to break even. If difficulty kept rising at the same pace, by day 200 they’d be making 2.4 bitcoins per day, and it would take 1024 days to break even with no difficulty increase. Assuming 25 cents per kw/h, and $100 a bitcoin, it would cost 0.43 of a bitcoin per day in electricity which means the unit would no longer be profitable on a power usage basis by day 307, at which point it will have produced 2620 bitcoins.

Bear in mind this is only for the first few units, and that’s running 24/7 pumping out around 24,000 BTU, so yes, medical bills from heat stroke will be on top of that.

But Alas, the chips don’t run nearly as well as they’re supposed to, frequently running too hot and giving multiple hardware failures. Coindesk noted in one of the first ever runs of the Minirig by hosting provide gigavps that it was running much too hot and erroring out.

At the time of posting, gigavps warned that the unit would be repeatedly shut down while ckolivas, who was assisting, modified the machines software to optimise performance. After some tweaking, the device was said to have been left to run continuously for two hours, and was shown to have an average hash rate of 478.1 GH/s. As you can see in the table below, ASIC number four (of a total of eight hashing chips) ran significantly hotter (86 degrees) and consequently gave the highest hardware (HW) error rate. 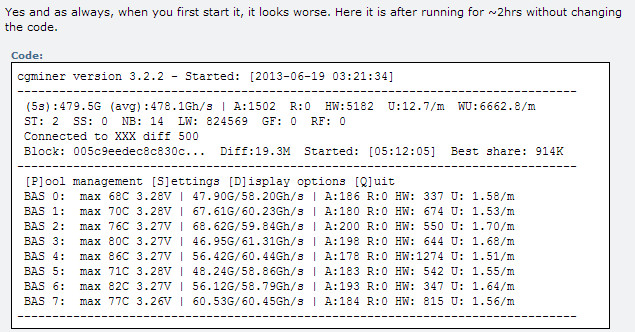 So, what happens if you just decide you don’t want this, you don’t want to wait over a year to get a $22,000 broken piece of shit? Nothing, because BFL won’t let you cancel your preorder because they’re now “shipping”, i.e. they sent out one unit to their own company shill. 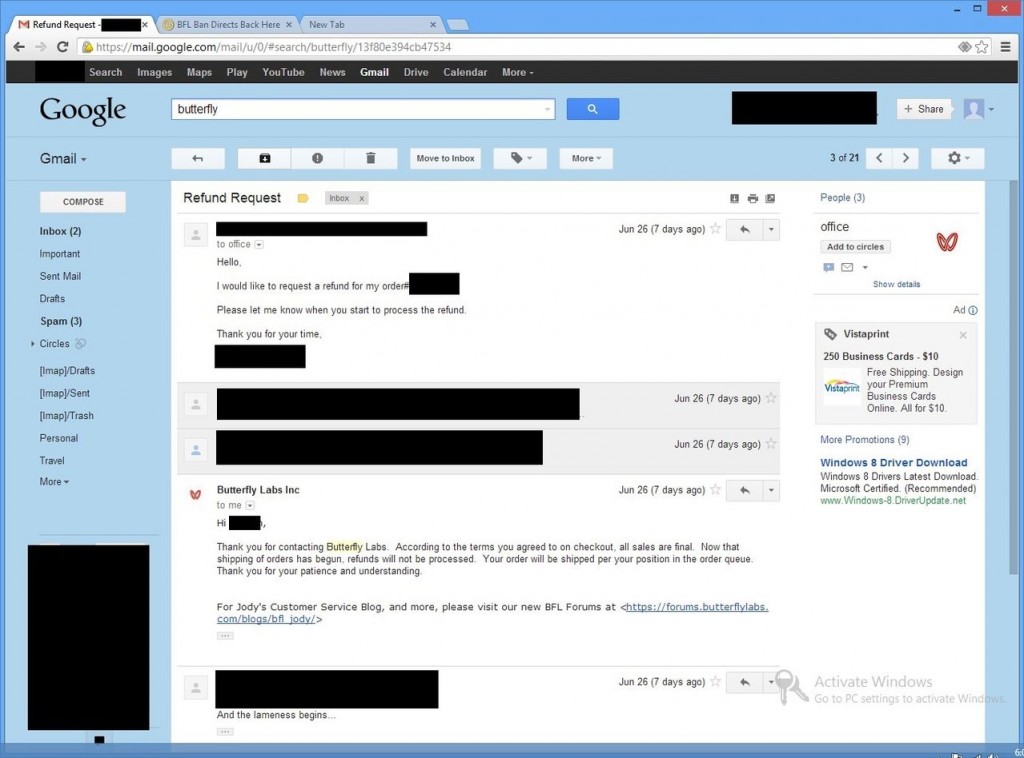 Which is of course illegal regardless of what Butterfly Labs may say.

So in summary: Don’t buy anything from Butterfly Labs … ever.

UPDATE:Butterfly Labs get a miner seized in Germany for faking CE certifications.